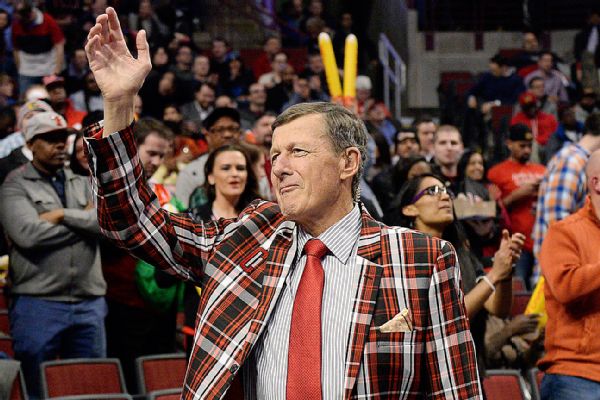 Longtime Turner Sports broadcaster Craig Sager has died at the age of 65, the network confirmed in a statement.

"Craig Sager was a beloved member of the Turner family for more than three decades and he has been a true inspiration to all of us," Turner president David Levy said in a statement. "There will never be another Craig Sager. His incredible talent, tireless work ethic and commitment to his craft took him all over the world covering sports.

"While he will be remembered fondly for his colorful attire and the TNT sideline interviews he conducted with NBA coaches and players, it's the determination, grace and will to live he displayed during his battle with cancer that will be his lasting impact. Our thoughts and prayers are with Craig's wife, Stacy, and the entire Sager family during this difficult time. We will forever be Sager Strong."

Known for his colorful and distinctive suits during his more than 40-year career, the legendary sideline reporter battled acute myeloid leukemia since he was first diagnosed in 2014.

Sager was admitted back into the hospital in late November 2016.

In a statement, NBA commissioner Adam Silver said teams will observe a moment of silence in Sager's memory.

"I -- along with the entire NBA family -- am deeply saddened by the passing of Craig Sager," Silver said. "Craig was as vital to the NBA as the players and coaches. A true original and an essential voice on Turner Sports' NBA coverage for 26 seasons, Craig chronicled some of the most memorable moments in league history and was a ubiquitous presence with his splashy suits and equally colorful personality.

"Craig earned widespread respect for his insightful reporting and inspired so many, most recently with his courage. Our hearts go out to his wife, Stacy; his children, Kacy, Craig Jr., Krista, Riley and Ryan; and his friends and colleagues."

After his initial diagnosis, Sager, who worked for Turner for more than 30 years, missed the 2014 and 2015 NBA playoffs and part of the 2014-15 regular season, as well as the 2015 NCAA men's basketball tournament. During the 2014 NBA playoffs, his son Craig Sager Jr. did a sideline interview with Spurs coach Gregg Popovich, whose interviews with Sager had become must-watch television.

"You did a great job," Popovich said to the younger Sager, "but I'd rather have your dad standing here. Craig, we miss you, you've been an important part of all of this for a long time doing a great job. We want your fanny back on the court, and I promise I'll be nice."

Popovich didn't take questions from reporters prior to Thursday night's game in Phoenix. Instead, he walked out of the visiting locker room and, with a somber tone, spoke only of Sager for close to two minutes.

"A day like this, basketball has to take a back seat, as we all think about somebody who was very unique, very special,'' Popovich said. "Whether you really knew Craig or not, you got the feeling that he was a very special person in a lot of different ways, and right now I just feel for his family.''

Sager's passing brought out condolences from every corner of the NBA, and Hall of Famer Larry Bird expressed what many were feeling.

"He was as identifiable with the NBA as any player or coach,'' Bird said. "The league will not be the same without him.''

Through a partnership between Turner Sports and ESPN, Sager worked his very first NBA Finals game in June, sideline reporting with ESPN's Doris Burke for Game 6 between the Cleveland Cavaliers and the Golden State Warriors, which the Cavaliers won.

"First of all, let me ask you a question," LeBron James said after the game. "How in the hell do you go 30-plus years without getting a Finals game? That don't make no sense.

"But I'm happy to see you, man. Much love and respect. I'm happy I was able to witness it in front of these fans. We really appreciate you."

Shortly after that, ESPN presented Sager with the Jimmy V Perseverance Award at the 2016 ESPYS.

"Whatever I might've imagined a terminal diagnosis would do to my spirit," Sager said when receiving the award, "it's summoned quite the opposite -- the greatest appreciation for life itself.

Said ESPN president John Skipper: "Our thoughts are with the Sager family and our friends at Turner Sports. Craig was a universally respected and beloved reporter and a one-of-a-kind personality. His memorable ESPYS speech demonstrated his exceptional strength and a relentlessly positive energy that inspired millions of us."

Sager underwent three bone marrow transplants -- the most recent via an anonymous donor in August 2016 -- and more than 20 chemotherapy cycles, including one that lasted for two weeks, around the clock. He also was hospitalized numerous times for pneumonia, among other ailments. In March 2016, Sager said on HBO's "Real Sports" that he'd been given three to six months to live, without treatment.

Born June 29, 1951, in Illinois, Sager graduated from Northwestern University in 1973 with a degree in speech -- and with a run as the school mascot, Willie the Wildcat. He first made his name at age 22, when he interviewed Hank Aaron on his way to home plate, moments after Aaron hit his 715th home run to break Babe Ruth's record.

Sager was in the middle of the scrum as the world tried to congratulate Aaron. When asked years later what Sager thought would have happened if he tried to interview Aaron the same way today, he told Yahoo! Sports, "I'd be shot."

He later worked for CNN, handling the network's first live remote report from the 1980 MLB playoffs. He co-anchored "CNN Sports Tonight" and anchored "College Football Scoreboard" in the 1980s.

Although Sager covered a wide variety of events, including college football, the NFL, the World Series, the Goodwill Games, the Pan Am Games, World Cup soccer, golf, tennis and the Winter and Summer Olympics, his home was the NBA.

Players and fellow broadcasters rallied around Sager during his fight. Reporters began using the hashtag #SidelineForSager and dressing in colorful outfits to show their support. In April 2016, Rockets center Dwight Howard and his D12 Foundation held a blood drive to honor Sager.

"I know a lot of people deal with a lot of different types of cancers and leukemia," Howard said. "Craig is a close friend of mine, family. He's part of the NBA family. You hate to see anybody who is a part of you go through anything. I just want to do whatever I can to help."

The National Basketball Players Association said in a statement that Sager "was a one-of-a-kind reporter who embodied the spirit of the game of basketball in a truly colorful fashion. Through his work, he was able to connect players, coaches and fans to the game we all love. The passion and fight he displayed during his battle with cancer is an inspiration to us all. Our thoughts and prayers go out to the Sager family at this extremely difficult time."

After a Final Four loss at the 2016 NCAA tournament, Syracuse coach Jim Boeheim told Sager, "I'm proud of you. I'm really proud of you and what you're doing. You're a fighter. It's something we should all aspire to be, and you're setting an example that we all should be very happy to try and follow."

Sager and his wife, Stacy, a former Chicago Bulls dancer, have two children together, Riley and Ryan. Sager's other three children -- Kacy, Krista and Craig Jr. -- are from a previous marriage.