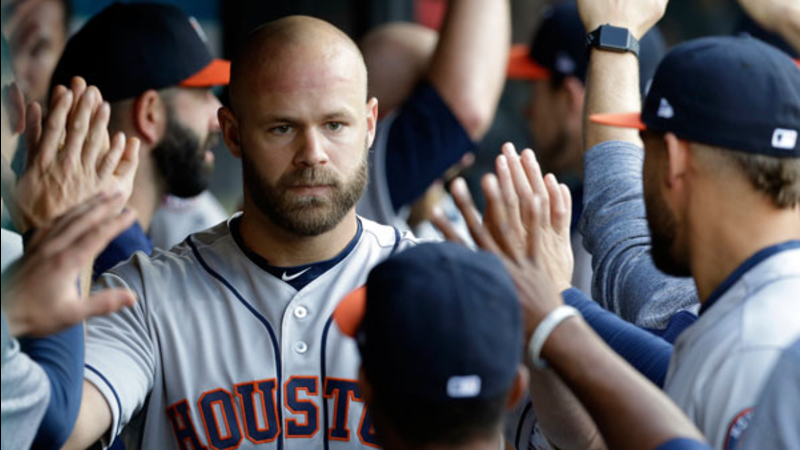 HOUSTON (KTRK) -- When he was young, Evan Gattis used to imagine himself running the bases on television. Despite all of life's curveballs, that dream is now coming true.

"It's what you dream about as a kid, you come this far, let's just win the thing," Gattis said at the end of the 2017 ALCS as the Houston Astros advanced to this year's World Series.

It's not just the fact that the team's designated hitter almost never wears batting gloves that makes him different, it is the winding road he's traveled to get to the major leagues.

At one point considered one of the top catchers in high school baseball, Rice University offered the Forney, Texas native a scholarship to play first base. Instead, Gattis opted for a position as catcher with the Aggies, though he never made it to College Station. He went to rehab instead, crippled by anxiety and substance abuse.

"He looked me in the eye and he said 'I don't want to talk baseball anymore, I'm done,'" said his father, Joe Gattis as his son gave up on the game.

Then began a long line of stops and starts, bopping around the country. He took a job as a parking valet in Dallas, worked as a ski lift operator in Colorado, begged for food when he found himself broke in New York City, all before driving to California in search of a spiritual adviser to help Gattis find himself.

On his way back from California, he reached out to Drew, then a pitcher at the University of Texas-Permian Basin.

"He called me one day on his way home and said I'm ready to play again and that was all I ever needed to hear," said Kendrick.

Not only was Gattis well liked by his team, his big at-bats proved he never lost his touch.

"We've seen other athletes that have been out of baseball and try to come back and a lot of times it doesn't work," said his former baseball coach at UT-Permian Basin, Brian Reinke. "I mean this was the right place at the right time for Evan Gattis."

After just a short time in Odessa, Gattis was drafted in 2010 to the Atlanta Braves. Along the way he played ball in the minor leagues, before being called up to the big league. The Braves traded him to the Astros in 2015.

There have been injuries and surgeries along the way, but through all of the challenges, his father says it has made him a more focused player.

"This is his job. He goes and does his job, goes home, cooks some ribs with everyone, drink a beer or two, it's good," said Joe Gattis.

Once afraid of failure, his confidence now no more evident than in the hits he sends sailing out of the park in his first World Series.