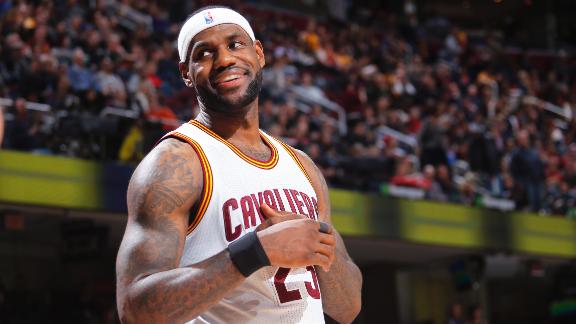 NEW YORK -- In a move the National Basketball Players Association hopes will give it strength in upcoming collective bargaining talks with NBA owners, LeBron James was unanimously elected first vice president at a meeting Friday night.

James was asked to run for the open seat by union president and close friend Chris Paul, sources said. He accepted because he sensed the importance of what is setting up to be another potential labor struggle in 2017, when the union is expected to opt out of the current collective bargaining agreement.

With Paul, James and new, aggressive executive director Michele Roberts, the union has loaded up with high-profile faces for a fight for a bigger portion of what could be a $7 billion revenue pie two years from now.

Just how big a role James eventually will play, though, is yet to be seen. He did not attend the meeting because he was committed to a sponsor's event across town. He talked to various members of the executive committee over the phone and plans to meet with Roberts this weekend.

After they were forced into conciliatory bargaining because of troubles in the economy in 2011, a new $24 billion television deal and explosive franchise values have the players setting the stage to enter the next round of talks with more leverage. James, as a result, felt it was important to take on an official role, sources told ESPN.com.

The union believes having James and Paul, the Los Angeles Clippers' All-Star point guard, on the front line will increase the pressure, both publicly and privately, on owners.

"I cannot tell you how delighted I am; the union is supported by players across the spectrum," Roberts said after leading a meeting of approximately 50 players, including All-Stars Carmelo Anthony, Russell Westbrook and Kyrie Irving.

"LeBron has been a force to be reckoned with among our players since the man hit the court. We have always wanted to have players of influence be included on our executive committee. It gets your attention."

James has been getting more interested in union business the past few years. In 2013, he considered running for union president but stepped back when Paul emerged as a candidate for the position. Last summer, he signed a one-year contract with a player option to ensure he would be a free agent again in 2016, when new television money could enable him to sign a contract that could approach $150 million in value.

James replaces Roger Mason on the executive committee. Mason retired as a player to take a full-time role with the union.

In their other major action Friday, the players unanimously rejected the league's proposal to gradually increase the salary cap once the new television contract comes online in 2016. With projections that the salary cap could jump in excess of $15 million that summer, owners have suggested what is being called a "cap smoothing" proposal that would phase in the increases.

The players, who are promised 51 percent of basketball-related income, are not contractually obligated to make any changes.

"The proposal the league put forth would artificially decrease the salary cap," Roberts said. "That pretty much killed it."

The James vote and the cap-smoothing discussion dominated the meeting. Other topics have been pushed to the back burner until those are settled. That includes the installation of human growth hormone testing, which has been promised for several years; what effects the push by the league for legalized gambling would have; and a revisiting of the one-and-done rule for college players.

Commissioner Adam Silver, who will hold his news conference Saturday, has said he favors raising the age limit to 20. But Roberts made it clear she is sternly against that.

"Be happy with the one-and-done," Roberts said. "It's not going to be two-and-done."