LeBron James predicts Kevin Love will have 'hell of a season' 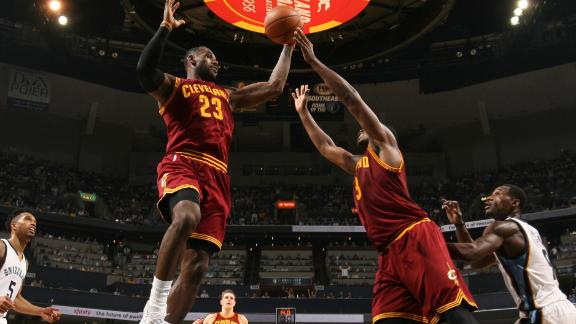 "We'll use Kevin however he wants to be used," James said after Love led Cleveland with 17 points and 13 rebounds in the Cavs' 106-76 win over the Memphis Grizzlies on Wednesday. "I told you Kevin is going to be our main focus. He's going to have a hell of a season. He's going to get back to that All-Star status."

Playing for the first time in more than six months after dislocating his left shoulder in the first round of the playoffs against Boston, Love has put up averages of 17.5 points, 10.5 rebounds and 3.5 assists in Cleveland's two games against Chicago and Memphis.

"He's the focal point of us offensively," James said. "I know I can go out and get mine when I need it. But I need Kev to be as aggressive as he was tonight, and when he rebounds at the level he did tonight, the shots will automatically fall for him."

James has 37 points through Cleveland's first two games, and Love has 35.

After a rocky first season that included James calling out Love on social media and Love picking Russell Westbrook over James for MVP, the pair met in Los Angeles for multiple lengthy conversations this past summer before Love agreed to a max five-year, $113 million extension with the Cavs.

"I knew he'd be sharp when I had my conversation with him in Los Angeles in the offseason," James said when asked if he was surprised how in tune Love's game has been right out of the gate.

Love was asked what message he conveyed to James during their time together in L.A.

"Just that I can do more," Love said. "I think that he knew that. Since then I think everybody has really stepped up and asked what they can do in their respective roles. From a comfort standpoint, I just feel a lot, a lot better."

Love was named an All-Star in three out of his six seasons with the Timberwolves before finishing sixth in All-Star voting among all Eastern Conference frontcourt players last season and failing to make the team.

Cavs coach David Blatt, who last week said Love was in the best shape of his life, complimented Love for his production thus far.

"I've said that he was very active in terms of conditioning," Blatt said. "And obviously, in terms of the rehab, he couldn't and didn't get involved in contact work until just a few weeks ago. So as far as game rhythm, I think it's natural that he's a little bit behind as far as that's concerned. But you didn't see it tonight. He was not only active, but he was very efficient, and he's played two pretty good games for us after sitting out for a long, long time. A lot of credit to him."