LeBron James: Not breaking down, despite poor showing 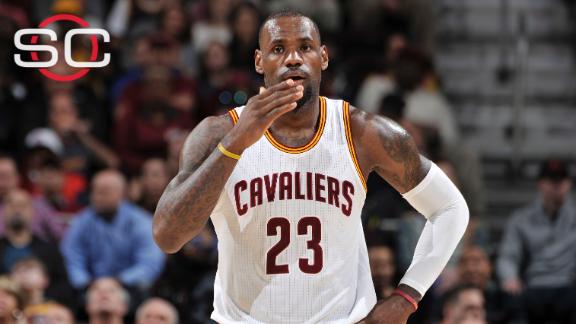 INDEPENDENCE, Ohio -- Coming off his worst game of the season -- a 12-point, six-turnover debacle on 5-for-18 shooting in a loss to the Detroit Pistons -- LeBron James vowed that his body is not breaking down as the season drags on into the post All-Star, pre-playoffs dog days.

In fact, James said he's better off this season at 31 years old than he was last season, when he missed a career-high 13 games, including a two-week hiatus to rest.

"It's how my body was feeling," James said Wednesday after the Cleveland Cavaliers held shootaround in preparation for their game against the Charlotte Hornets. "Last year I was banged up. It's not a mindset, it's just reality. This year I feel 10 times better than I did last year. So that's the mindset."

James has only sat out one game through the Cavs' 40-15 start to the season. However, Cleveland coach Tyronn Lue told reporters after the loss to the Pistons that his gut instinct was to rest James that night and that he wished he followed through on it.

Lue previously stated that his goal was for the Cavs to clinch the No. 1 seed in the East before he started resting James, a 13-year veteran, in preparation for the postseason.

James admitted making five straight trips to the Finals has started to catch up with him, but not that he would consider sitting out games.

"I guess I've played so much basketball, man, feeling great, those days are pretty much over," James said. "I don't know anybody that's played 13 years that you can say, 'Oh, I woke up and I feel great.' I feel great as far as life and getting an opportunity to wake up, but as far as me feeling like a 23-year old, those days are passed."

San Antonio Spurs coach Gregg Popovich is known for periodically pulling his players from the lineup to protect them for the long haul. James did not want to compare the Cavs' practices to the Spurs', however.

"I can't speak on what other people do, other teams," James said.

The one team unlikely to rest players en masse is the Golden State Warriors as they continue to pursue the chance to break the Chicago Bulls' all-time record of 72 wins in a season.

James was asked if Golden State's run is diminishing the accomplishments of other teams, like the Cavs.

"There's so much great basketball being played, and I understand that those guys are the cream of the crop," James said. "They're the defending champions, and they've continued to get better as they were from last year. But they're not going to be the only team that enters the playoff pool. You can be 82-0, man, once the playoffs start, everyone's 0-0. Let's get back to the beginning. It's messed up, but that's what happens. And hopefully you've built enough chemistry, which it seems like they have, and enough out on the court where you can take that on to the next phase, but regular season record-wise is great for the record books, but it means nothing for the postseason."

James was also asked about former Cavs big man Anderson Varejao, saying "I can tell this group, they love each other," upon his arrival to the Warriors over the weekend.

"I would hope if you're 50-5 that everyone loves each other," James said. "I mean, what else do you want at that point? Duh. Anybody could say that. Stevie Wonder could say that."