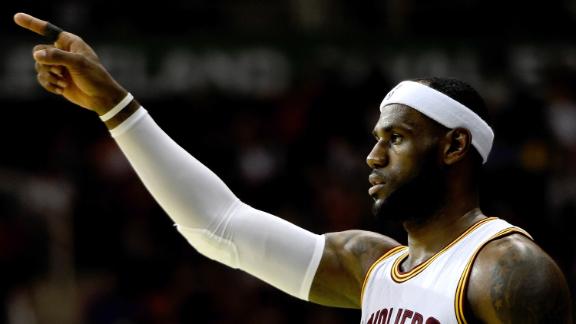 CINCINNATI, Ohio -- LeBron James made one thing abundantly clear Wednesday: He is looking squarely ahead with the Cleveland Cavaliers this season and is by no means stuck in the past.

No, James said, he didn't think he was still playing for the Miami Heat during that bizarre play in the Cavs' preseason game against his former team last weekend. And yes, James explained, he was indeed able to forgive owner Dan Gilbert for what happened between them before and pave the way for his return home.

But first James refuted the notion that he accidentally set a pick on his new teammate, guard Matthew Dellavedova, while former teammate Norris Cole was setting up the Heat's offense in the first quarter.

James' meeting in Rio de Janeiro against his former teammates Saturday was mostly anticlimactic -- the most memorable moment of the game might have come less than a minute after tipoff when James' 6-foot-9 frame stood in the way of the 6-4 Dellavedova, freeing up space for Cole to operate.

Cleveland won in overtime, but James' night was long finished by that point, as he put up seven points and eight assists in 21 minutes before exiting early to rest.

A clip of the play in question went viral, leaving many to wonder whether James had momentarily forgotten which team he plays for now.

"For non-basketball people," James began with a smirk when asked about the apparent blooper before the Cavs played the Indiana Pacers in Cincinnati on Wednesday, "our coverage is for me to show and for Delly [Dellavedova] to go under me and we just didn't get the call right at the time. Delly was supposed to slide under me and we kind of ran into each other.

"So, for non-basketball people, they like to critique everything that I do. It's stupid."

Dellavedova had a similar account of the flubbed defensive coverage.

"My family sent me the link of it," Dellavedova told ESPN.com. "He just showed out [on the ball handler] and I just needed to go under. So, it wasn't really anything. I mean, you know how the media can get, right? It's obviously more crazy with anything involving LeBron."

Dellavedova said that it wasn't until he saw the video of the play just how strange it appeared.

Getting on the same page with a new teammate is one thing. Finding common ground with a former employer after a difficult parting is something different.

James also addressed how he was able to forgive Gilbert and play for the man who excoriated him with a public letter on the Cavaliers' team website in 2010.

"As a man, if you got a problem with somebody, you sit down face to face and you talk to them eye to eye. And you hash it out and move on," James said. "So, I think a lot of things that go on in life or in sports with people kind of holding grudges is because they're afraid to actually take a step forward. It's a fine line between pride and progress, and I'm on the progress side. I'm not on the pride side."

James' explanation echoed the sentiments he shared in an essay co-written by Lee Jenkins of Sports Illustrated, announcing his return to the Cavaliers in July.

"To make the move I needed the support of my wife and my mom, who can be very tough," James wrote at the time. "The letter from Dan Gilbert, the booing of the Cleveland fans, the jerseys being burned -- seeing all that was hard for them. My emotions were more mixed. It was easy to say, 'OK, I don't want to deal with these people ever again.' But then you think about the other side. What if I were a kid who looked up to an athlete, and that athlete made me want to do better in my own life, and then he left? How would I react? I've met with Dan, face-to-face, man-to-man. We've talked it out. Everybody makes mistakes. I've made mistakes as well. Who am I to hold a grudge?"

James' speaking so openly about patching things up with Gilbert was a reminder of how far he has come since his first seven-year stint with the Cavaliers.

Now with the benefit of teammates such as Kevin Love, Mike Miller and Shawn Marion who he helped convince to come to the Cavs this summer by his sheer presence alone, James reflected on a time when he failed in that department.