LaMarcus Aldridge: 'There's gonna be some boos' in Portland return 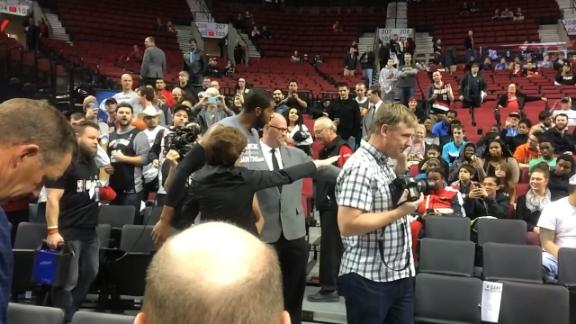 PORTLAND, Ore. -- San Antonio'sLaMarcus Aldridge downplayed his return to Portland on Wednesday, saying "both sides have what they want," while admitting "there's gonna be some boos," when the power forward takes the court at the Moda Center.

"I'm just trying to get a win, and [it's] another game on the schedule," Aldridge said during the Spurs' morning shootaround. "It's definitely going to be different for me, being here, where it all started. But I'm not gonna put too much pressure on it."

San Antonio's prized acquisition in free agency, Aldridge spent his first nine NBA seasons as a Portland Trail Blazer, making four All-Star teams in addition to producing franchise records for rebounds (5,434) and double-doubles (234), while ranking No. 2 in franchise annals in points (12,562), and third in minutes (22,972).

Aldridge joined San Antonio in July, coming off a season in Portland in which he averaged a career-high 23.4 points to go with 10.2 rebounds and 1.7 assists.

Aldridge recognizes his return to Portland could result in boos from the home crowd, as many of the team's fans were unhappy with his decision to leave the Trail Blazers to join the Spurs.

After all, Aldridge expressed commitment to Portland in July of 2014, telling The Oregonian he wanted "to be the best Blazer ever," adding "I have so much history [in Portland] it just makes sense to stay."

Obviously, he didn't and was asked what changed from the time he uttered those remarks to when he ultimately decided to sign with San Antonio.

"I'm not going to get into all of that," Aldridge said. "What's done is done. I feel like both sides have what they want. Now I'm here."

Pressed further, Aldridge said: "I'm done with that. I'm not talking about that anymore. I'm here. I'm playing tonight. That's all that matters. I'm not going to keep harping on what happened then. They've moved on. I've moved on. So that doesn't matter anymore."

Blazers coach Terry Stotts had nothing but praise for Aldridge.

"He was terrific in my three years," Stotts said. "We wouldn't have had the success that we did if it weren't for him."

Aldridge entered the visitors locker room at the Moda Center on Wednesday morning for the first time of his career, calling the experience "weird." He conceded "of course" it will hurt for the Portland fans to boo him "because I've had so much history here. I have so much love for this city. That will never change. So it will [hurt], but I'll be OK."

Aldridge recently described San Antonio's "family" atmosphere when asked about the difference between the Spurs and the Trail Blazers. But on the court Aldridge mentioned, "offensively, we have so many talented guys" that "I'm not as needed as I was here [in Portland]."

But on a per-minute basis, Aldridge is actually receiving more touches in San Antonio than he did last season in Portland (67.2 touches per 36 minutes with the Spurs compared with 65.5 last season with the Trail Blazers), according to ESPN Stats & Information.

"It's going to be weird for sure. This is all I've known for 10 years," Aldridge said. "So it's going to definitely be weird tonight. I love this city. I love the fans. I grew up here. I developed here as a player, as a man. So I love this city, and that will never change. I'm thankful for all the fans that still love me. It's going to be mixed. I definitely feel like there's gonna be some boos. There's gonna be some cheers; so probably 50-50. Hopefully not 60-40. But we'll see tonight."