LaMarcus Aldridge: Spurs made me comfortable with leaving Portland 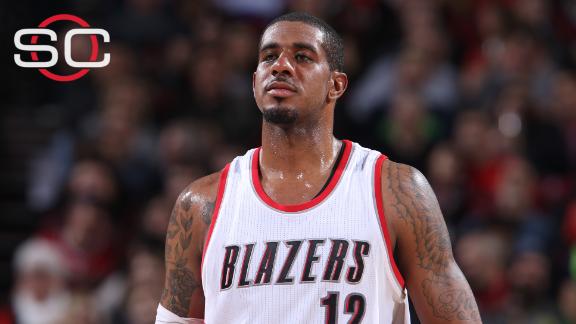 "You've seen the TNT interviews, right?" Aldridge joked Friday during his introductory news conference. "He was like that but a little bit nicer. Pop isn't going to tell you sweet stories or try to make up things. He's a very honest person. He's very caring, but he's not going to sweet-talk you. That came across clear in the meeting. He had good things to say, but our meeting wasn't an hour of him just sweet-talking me. It was basically just talking basketball, and that was awesome."

Perhaps more awesome for the Spurs is that their recruitment, which also involved Tim Duncan, Tony Parker and general manager R.C. Buford, landed Aldridge, one of the most coveted free agents on the market.

A Texas native, Aldridge, who spent his first nine NBA seasons with the Portland Trail Blazers, met with the media at the Spurs' training facility Friday and detailed the process that led to his decision.

"When you're making such a big decision, you're never going to be 100 percent right away," Aldridge said. "Leaving the organization I was at for nine years, where I've had roots and I'm embedded in their history -- it is never easy to leave. There were moments I did waver because I was leaving and going to something new. Talking to R.C. more, talking to Pop more, those guys made me feel comfortable. They made it feel like home. They made me feel safe to take this leap of faith that so far I've been fine with."

Aldridge conceded he has gone "back and forth a lot," but as he prepared to go to bed on July 3, he was almost certain he would wind up playing for the Spurs.

"When I even thought [San Antonio] was my first option, I called Portland and I told them I wasn't coming back," Aldridge said. "I went to sleep that night thinking I was gonna be a Spur. When I woke up that morning, I still felt comfortable with it. I didn't freak out in the middle of the night. I didn't wake up screaming 'No.' I ended up sticking with it."

Aldridge averaged a career-high 23.4 points per game last season to go with 10.2 rebounds and 1.7 assists.

With the Spurs, Aldridge will join his childhood idol Duncan. He said he was surprised by Duncan's involvement in the recruiting process.

"He was a big part," Aldridge said. "He was huge in my decision. I was definitely shocked when he played a part in it, whether he was calling or coming to California. I felt like he was involved, and I think that showed how much he wanted to play with me also. That was priceless."

The Spurs originally met with Aldridge on July 1. Two days later, Popovich circled back for a second meeting.

Long before all that, though, the Spurs started laying the groundwork to provide enough cap flexibility for the team to spend this summer.

San Antonio headed into July with 10 contracts set to come off the books. The Spurs let a few free agents, such as Cory Joseph (Toronto), Marco Belinelli (Sacramento) and Aron Baynes (Detroit), walk, while trading Tiago Splitter to Atlanta to free up the space necessary to land Aldridge.

"From the flexibility standpoint, not necessarily for LaMarcus but for a small group of players, [the process] started when many of these contracts were signed to line up [to expire] this summer," Buford said. "To move Tiago and not know you're gonna get LaMarcus, that was a significant risk assessment. We'll miss the relationships that we have with Marco, with Cory, with Aron and Tiago. So losing those relationships, especially when they're such -- not only a big part of the success but the chemistry and culture of the group -- you have to continue to recognize that there will be some losses in this process. But it's never easy."

Buford hoped that would be enough to persuade Aldridge to sign with the Spurs.

When the Spurs fell to the Los Angeles Clippers in the first round of the Western Conference playoffs, there was uncertainty about the returns of Duncan, Manu Ginobili and Danny Green, who was set to hit free agency in July but wasn't a lock to return because of the club's cap situation, which was made tighter withKawhi Leonard's new deal.

Now it appears the Spurs have reloaded for the 2015-16 season, bringing back almost their entire nucleus and adding Aldridge.

"You're never confident that it will work out this way," Buford said. "You hope to plan as well as you can. You hope to prepare. You hope to recognize your strengths and who fits with those strengths. There were a lot of free agents on the market this summer. There was one that we went after because that was the one who fit us. When it comes time to sit in front of LaMarcus and the people who are important in his decision-making, it was, 'How do we make him feel like we're a fit for him?'

"I think our guys knocked it out of the park for not having a presentation but just having an environment that allowed him to understand who we were, how we do things, why we do things and what we hope to build. It's not like we made something up or came up with a new magic pill. It's being who we are."

Aldridge excited for change to Spurs
LaMarcus Aldridge explains the biggest changes for him in moving to San Antonio and what it's like to be recruited by coach Gregg Popovich.