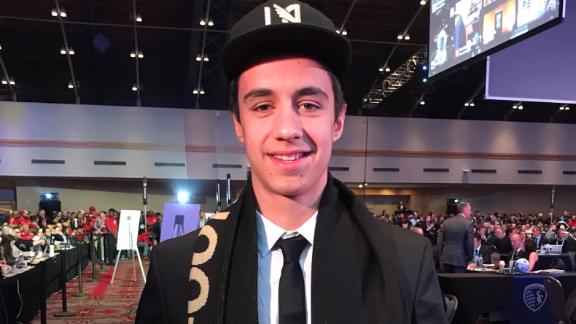 LAFC selected a pair of full-backs with two of the first three picks in Friday's MLS SuperDraft for college players, starting withAkron's Joao Moutinho with the top selection.

But perhaps the biggest news to come out of the draft came when hosts Philadelphia Union sent $1.2 million in allocation to the Chicago Fire for winger David Accam.

Moutinho, who turned 20 last week, is primarily a left-back but can play in both defense and midfield.The Portugal native scored three goals with five assists in 24 games in his only collegiate season at Akron and was named Mid-American Conference Freshman of the Year.

The expansion club then worked a trade with D.C. United to move up to the third pick and selected the top-rated available right-back inTristan Blackmon from Pacific. In exchange, D.C. received $100,000 in targeted allocation money and another $100,000 in general allocation money.

Moutinho has already signed a Generation Adidas contract with MLS and will now be assigned to expansion club LAFC, which begins its inaugural season in March. As aGeneration Adidas player,Moutinho's salary will not count against LAFC's salary budget.

"It's a roller coaster of emotions to be honest," Moutinho said after being selected. "It's something I never thought about when I came here. To be the first pick in a great group of players is an honor for me."

Moutinho, who previously played in Sporting Lisbon's academy, is the second Akron player to be selected with the top pick, afterSteve Zakuani in 2009.

The LA Galaxy also selected a defender with the second pick, taking center-back Tomas Hilliard-Arce out of Stanford, where he won three national titles.

FC Dallas moved up to select Michigan wingerFrancis Atuahene with the fourth pick after sending $200,000 in general allocation money to the Montreal Impact.

The Chicago Fire also traded up to the fifth pick to select striker Jon Bakero, the winner of the Hermann Trophy, college soccer's top individual award, after scoring16 goals in 23 games for Wake Forest last year.

Bakero is the son of Jose Mari Bakero, who played for Real Sociedad and Barcelona in the 1980s and '90s, and appeared for Spain at the 1990 and 1994 World Cups.

Minnesota United then spent most of the money it gained in the trade with Chicago to take Montreal's pick at No. 7, and selected Indiana freshman strikerMason Toye. The Loons also added goalkeeper Matt Lampson and the No. 15 pick from Chicago in the deal.

The New England Revolution, under new coach Brad Friedel, took a pair of surprises at No. 8 and No. 9 in Western Michigan's Brandon Bye and Wisconsin's Mark Segbers.

The Fire kept dealing and picked the top-rated defensive midfielder in Syracuse's Mo Adams at No. 10 after a trade with Real Salt Lake.

The first goalkeeper off the board was Butler's Eric Dick, who went 13th to Sporting Kansas City, before a string of three in a row later in the first round to NYCFC, Houston and Columbus.

The third and fourth rounds will take place via a conference call on Sunday.

No. 1 pick Moutinho can't wait to get started with LAFC
Former Akron University star Joao Moutinho says he's ecstatic about playing for Bob Bradley after being selected No. 1 overall by LAFC in the 2018 MLS SuperDraft.