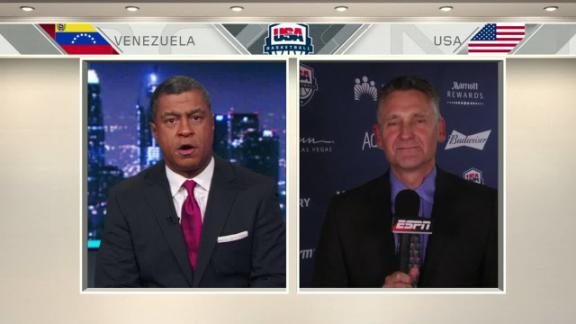 CHICAGO -- Kyrie Irving scored 13 points, DeMarcus Cousins powered a dominant performance in the paint, and the United States pulled away from Venezuela for an ugly 80-45 exhibition victory Friday night.

Coming off three straight flashy victories in Las Vegas and California, the United States shot 42.4 percent from the field and committed 13 turnovers in by far its worst offensive performance of its five-city tour in preparation for next week's Rio de Janeiro Olympics.

But the Americans used their superior athleticism to limit Venezuela to 24 percent shooting and owned the interior with a 54-29 rebounding advantage.

Returning to Chicago for the first time with the U.S. national team, Bulls star Jimmy Butler was cheered every time he was announced at the United Center. He had four points and eight rebounds in 21 minutes in his first start with Team USA.

Butler had one of the few electric plays for the U.S. when he ran out on the break and dunked Kyle Lowry's tip pass in the fourth quarter. DeAndre Jordan also had a vicious dunk off a lob from Kevin Durant, and DeMar DeRozan drew chants of "USA! USA!" with a windmill jam in the final minutes.

Klay Thompson also scored 13 points, and Cousins finished with seven points and 12 rebounds. Durant had nine points of 3-of-9 shooting.

John Cox scored 14 points for Venezuela, which will play the U.S. again on Aug. 8 in the Olympics.

Irving and company were greeted with a round of hearty cheers when they came out for pregame warmups. Fans lined the side of the court where the Americans had their layup line, and Anthony and Durant posed for pictures with a couple of eager boys.

Before Butler's introduction drew the most applause of the night, former Chicago coach Tom Thibodeau received a thunderous ovation when he was announced with the U.S. coaching staff. Thibodeau took a year off after he was fired by the Bulls in May 2015, and then was hired as Minnesota's coach and president of basketball operations in April.

The star power also extended to the sideline near the U.S. bench, where former Olympians Scottie Pippen and Dwyane Wade watched the action attentively. Wade was joined by his wife, actress Gabriel Union, hours after he held his introductory press conference for his new contract with his hometown Bulls.