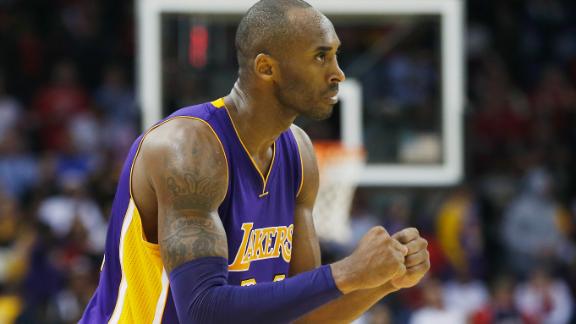 HOUSTON -- Dwight Howard sat out Wednesday's 98-92 loss to the Los Angeles Lakers with a sprained right knee, but the Houston Rockets center was still a topic of discussion for his former teammate, Lakers star Kobe Bryant.

Bryant was asked after the game whether he considers Howard to be a "p---y," the term Oklahoma City star Kevin Durant was overheard calling Howard during a recent game.

"No, I don't feel that way. I don't think Kevin does, either," said Bryant, who scored a game-high 29 points against the Rockets. "In moments of confrontation during a game, you'll say things in the heat of the moment.

"I know Dwight. I'm sure Kevin does. We don't really feel that way about him. It's like when you get in an argument with somebody, you'll say things out of frustration, out of anger, that you don't really mean."

Bryant and Howard were Lakers teammates during the 2012-13 season, when they often clashed before Howard eventually departed to join the Rockets as a free agent.

Then when they faced off Oct. 28 in Los Angeles, a 108-90 Rockets win, Howard elbowed Bryant in the chin after grabbing an offensive rebound, and the two had to be separated, although that didn't stop them from trash-talking each other, eventually drawing technical fouls.

In that game, Bryant was heard calling Howard "soft," among other things.

"Heat of the battle, heat of the moment," Bryant said of his comments. "You [reporters] have all been in arguments, you guys that are married. Sometimes you say things that you wish you could take back that you don't really mean. But it's in the heat of confrontation, and sometimes things come out."

Bryant said he has grown more concerned about trash-talking opponents in the digital age.

"Well, in the moment, no. In hindsight, yes," he said. "Especially now with social media and [the fact that] everybody has a camera. You try to be as conscious as possible to the fact that kids are watching."

Lakers Shock Rockets
Kobe Bryant scored a game-high 29 points in the Lakers' 98-92 win over the Rockets.