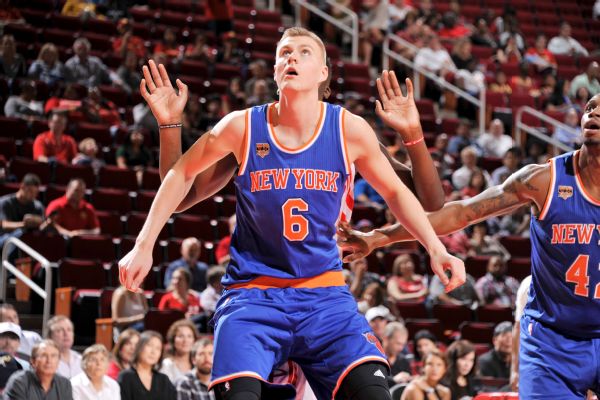 GREENBURGH, N.Y. -- The New York Knicks' new starting five haven't played together in the preseason. So Kristaps Porzingis knows that it will take time for the club to develop cohesion.

"It's going to take us some time to figure this whole thing out," Porzingis said on Sunday, two days before the Knicks open their season against the defending-champion Cleveland Cavaliers. "It doesn't have to be in a week. It takes time."

New point guard Derrick Rose was away from the team for more than two weeks this month during a civil trial in Los Angeles. And starting center Joakim Noah missed 10 days earlier this month because of a hamstring injury.

Both players' absences have seemingly affected the Knicks' chemistry during the preseason.

"I think we're definitely a work in progress," Noah said on Sunday. "We have a lot of work to do. We got to get better. We haven't had a lot of time to play together. Overall, I felt [Sunday's practice] was a good day. But we definitely have ... we have to get better."

Rose returned to New York on Friday after a jury found he and two friends were found not liable in a civil lawsuit that accused them of gang-raping Rose's ex-girlfriend. He met with coaches that day to go over elements of the offense that he had missed during his time in Los Angeles and practiced with his teammates Saturday and Sunday.

Porzingis said on Sunday that Rose looked strong during those weekend workouts.

"He's been learning really fast. He picks up this stuff really quick," Porzingis said. "I think with a point guard like Derrick, it'll be easier for me. He will try to make plays for us, and he'll try to make the game easier for us."

Porzingis added, though, that the Knicks would need some time with Rose to develop strong timing on offense.

"I don't want to put too much pressure on us that we're going to be really good right away," he said. "It's going to take some time."

All teams develop cohesion and chemistry over the course of the season, of course. But the injury to Noah and Rose's absence seem to have affected the Knicks' development under first-year head coach Jeff Hornacek, particularly on defense. New York ranked 25th among NBA teams in preseason defensive rating.

Noah said on Sunday that the Knicks had "a lot of work to do" on defense when he was asked about the subject after practice.

"We have to get better. Numbers don't lie, and right now I feel a step slow defensively," said Noah, who missed three preseason games because of the hamstring injury. "I have to do better. I have to do better for this ballclub. We all do."