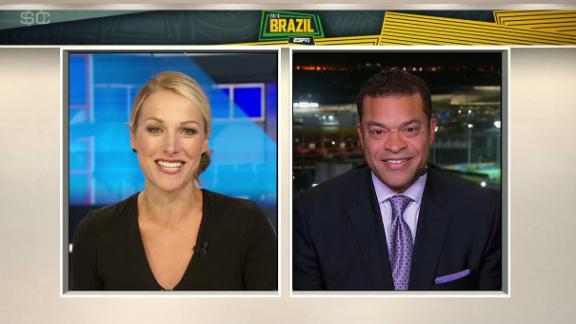 RIO DE JANEIRO -- The U.S. Olympic men's basketball team is still a little better than Spain and, as a result, the Americans are just one win from again being the best in the world.

The U.S. advanced to its third straight gold-medal game, beating Spain 82-76 on Friday in another tight matchup between the teams that met in the last two championship games.

Klay Thompson scored 22 points for the Americans, who will play Australia or Serbia on Sunday for their third consecutive Olympic title.

The U.S. was just good enough again against Spain, winning a much different game than the all-offense matchups that decided the last two gold-medal games. This one featured several technical fouls and neither team got into an offensive flow.

It was the lowest-scoring game for the Americans in the Olympics since the 2004 semifinals, when they managed 81 in a loss to Argentina.

DeAndre Jordan made his presence felt in the middle with 16 rebounds and four blocked shots to go with his nine points.

Kevin Durant added 14 points on the day he moved past LeBron James into second place on the U.S. Olympic career scoring list. Kyrie Irving had 13 for the U.S.

Pau Gasol scored 23 points for Spain, which made it tough on the Americans for the third straight Olympics, but again had to settle for coming close against the world's No. 1 team.

The Americans pulled away to win 118-107 in 2008 and held on for a 107-100 victory in London. Those were all-action contests, but the defenses made their mark in this one. Spain shot just 39 percent and couldn't get any consistent option other than Gasol, who played with a wrap covering his sore right calf.

It was the kind of defense the Americans thought they could play but hadn't much in the tournament. Serbia and France both surpassed 90 points against them and Australia scored 88, as the team with 10 Olympic newcomers took longer than hoped to grasp international offenses.

This time they contained a team that was as explosive as themselves over the last four games, as Spain had averaged 97.3 points and won by more than 25 per game after dropping its first two in Brazil.

The Americans finally built a comfortable lead when they opened the fourth quarter with six straight points to go ahead 72-57. Spain was able to keep the gap from getting any bigger and chipped away at it in the final minutes, the margin ending up smaller than in the previous matchups.
Related topics:
sportsespnspainklay thompsonmens olympic basketballgold medalnbabasketballpau gasololympic sportskevin durantriokyrie irvingus
Copyright © 2020 ESPN Internet Ventures. All rights reserved.
More Videos
From CNN Newsource affiliates
TOP STORIES