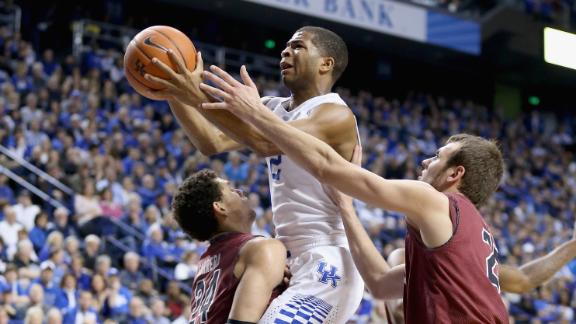 The Kentucky Wildcats are the unanimous No. 1 choice in The Associated Press Top 25 for the third straight week.

With one month to go until Selection Sunday, the Wildcats (25-0) received all 65 first-place votes from a media panel Monday after holding off LSU and rolling over South Carolina last week.

Should Kentucky remain at the top over the next five polls, it would become the eighth team to stay at No. 1 all season and first since UNLV in 1991.

"You keep taking everybody's best," Kentucky coach John Calipari said. "We're in a championship fight every time we walk into a building."

Kentucky matched its best start in school history -- tying the 1953-54 team -- with a 77-43 victory over South Carolina on Saturday.

"It's just, like, special," forwardWillie Cauley-Steinsaid Saturday. "It's special to me because Icame from one of the worst teams in Kentucky history [21-12 two years ago] to being on one of the top teams. It's just cool to see the evolution."

Next up for Kentucky is a road game against Tennessee on Tuesday, then a home game on Saturday against Auburn. The Wildcats close out the regular season with road games against Mississippi State and Georgia, with home games against Arkansas and Florida.

The No. 5 Badgers (23-2) are also off to the best start in school history after a 68-49 victory over Illinois on Sunday.

Utahmoved into the top 10 for the second time this season, up two spots to No. 9. Louisvilledropped three spots to No. 12 after losing to North Carolina State on Saturday.

Northern Iowamoved up two spots to No. 11 for its highest ranking ever. The Panthers have won 13 straight after making 12 3-pointers in a 68-57 win over Missouri State.

"They ... stole our energy and stole our spirit," Missouri State coach Paul Lusk said. "That's what good teams do."

The bottom three teams -- West Virginia, Ohio State and VCU -- all remained in the poll despite losses.

Kentucky Head And Shoulders Above The Rest
CBB Live Extra: Matt Schick and Adrian Branch discuss the gap between Kentucky and the rest of the SEC.