Kentucky (30-0) rallies from 9 down to beat Georgia 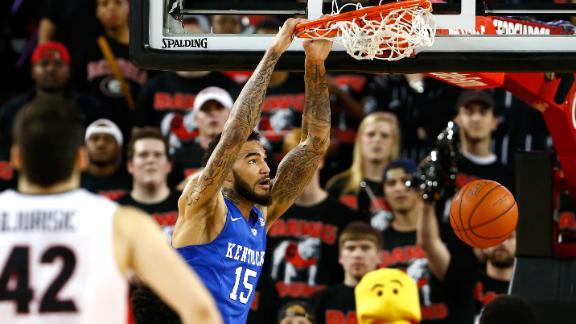 ATHENS, Ga. -- As Kentucky exhaled after its first close call in a while, a Wildcats fan held up a sign that said it all: "UK. The Unbeatables."

Make it 30-0. Facing the largest second-half deficit of its so-far perfect season, No. 1 Kentucky clamped down defensively, ripped off a 14-0 run and put away pesky Georgia 72-64 on Tuesday to remain unbeaten heading into the regular-season finale.

"You have kids here who have a will to win, they believe they're going to win, and they made the plays they needed to make," coach John Calipari said.

The Wildcats, improving to 17-0 in the Southeastern Conference, had won their previous five games by an average of 24 points.

They were really challenged in this one by Georgia (19-10, 10-7), which had the sellout crowd roaring when Yante Maten tipped in a miss of his own shot on the second attempt to put the Bulldogs up 56-47 with just over nine minutes remaining.

Kentucky has survived a few tight finishes along the way, most notably consecutive overtime wins over Mississippi and Texas A&M at the start of SEC play back in January. Twice this season, they have trailed by as many as 11 points, but both of those deficits were in the first half, when the Wildcats still had plenty of time to seize control.

Georgia, using its quickness to offset Kentucky's huge size advantage, had the Wildcats on the ropes after Maten's hustle play capped a 17-4 spurt.

Did losing cross their minds?

"We were never thinking about that," freshman Karl-Anthony Towns said. "We were just thinking what we needed to do at any given point to win the game."

Andrew Harrison knocked a 3-pointer down from the corner to turn the tide, but Kentucky was still in some trouble when Nemanja Djurisic scored on the inside and Marcus Thornton hit two free throws to make it 62-56 with five-and-a-half minutes to go.

That was Georgia's last gasp. The Wildcats began pounding the ball inside to the 6-foot-11 Towns, who managed to stay in the game until the closing seconds after picking up his fourth foul. He led the team with 19 points, with all but two coming in the second half.

Towns and Aaron Harrison were huge down the stretch, combining for 12 of the 14 points during the decisive run. Towns had seven, including a three-point play with 2:53 left that put Kentucky ahead to stay. Harrison chipped in with five, and Willie Cauley-Stein came up with a huge dunk off a missed free throw to give the Wildcats a four-point play on one possession.

Aaron Harrison scored 16 points, while his brother had 12.

Djurisic topped the Bulldogs with 18 points, but only four came in the second half. Thornton added 14, and Kenny Gaines had 11.

"We did some good things, some really good things," Thornton said. "We just didn't play perfect enough to win."

Kentucky pushed out to its largest lead of the first half at 32-27by taking advantage of a flagrant foul on Gaines. But Georgia scored the final five points, the last of them coming on a running floater off the baseline by Djurisic, with the ball dropping through the basket as the horn sounded.

Djurisic and the Bulldogs sprinted toward the locker room tied at 32. That was a striking change from the first meeting in Lexington, when Kentucky raced out to a 42-27 halftime lead and cruised to an 11-point win.

Kentucky: The Wildcats lead the series with Georgia 119-28. ... The previous best start in school history was 25-0 during the 1953-54 season. ... Kentucky clinched its third 30-win season in Calipari's six years as coach.

Georgia: Georgia honored its three seniors before the final home game of the regular season. Djurisic, Thornton and former walk-on Taylor Echols were flanked by their parents as they were introduced at midcourt. Djurisic's parents, who are from Montenegro, were in Athens this past week to see their son play collegiately for the first time. ... Thornton tied the school record for most career games with 129, a mark set by G.G. Smith and Michael Chadwick from 1996-99. ... The Bulldogs have two straight seasons with at least 10 SEC wins for only the second time in school history. The only other time was 2002-03.

TIGHT ALL THE WAY

There were 18 lead changes and 10 ties in the game. Kentucky's largest edge was the final margin.

Georgia: Travels to Auburn on Saturday. 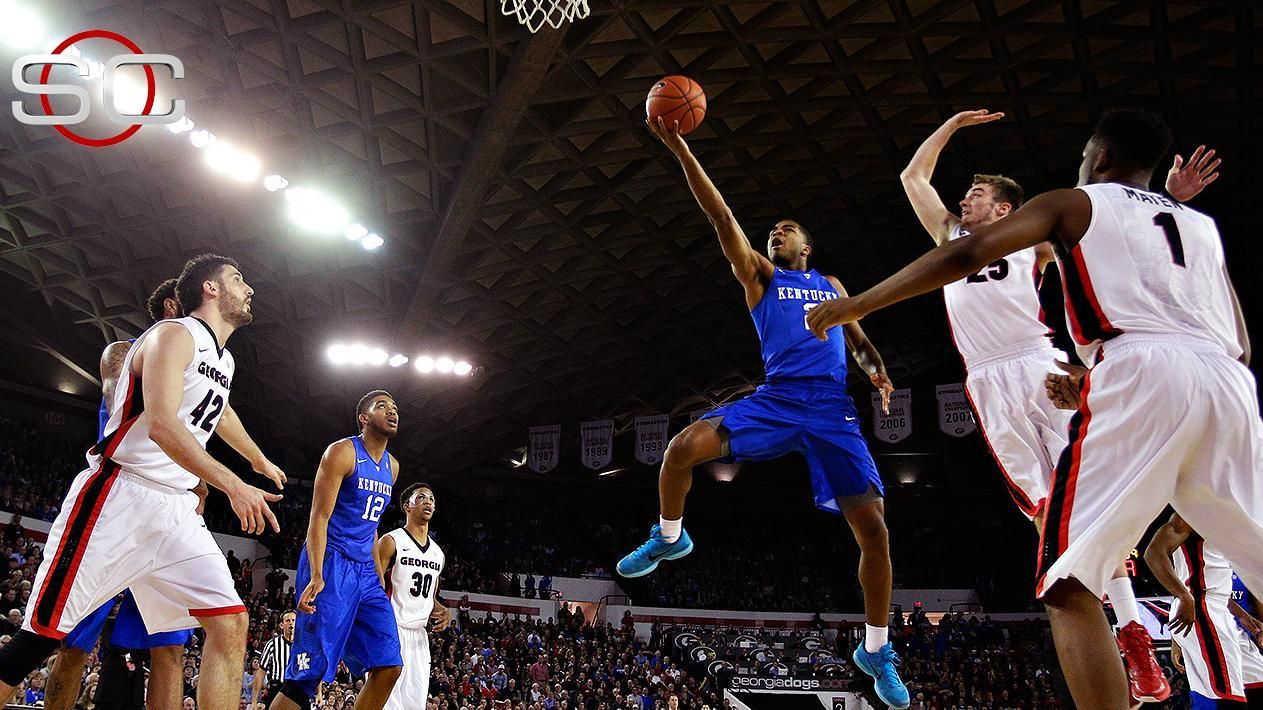 Kentucky Survives To Remain Undefeated
SportsCenter Highlight of the Night: Kentucky came back to beat Georgia 72-64 to improve to 30-0 on the season.