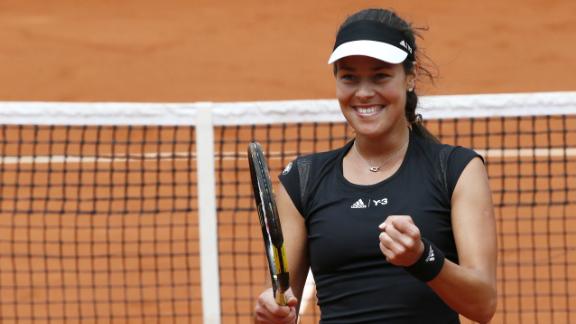 PARIS -- Kei Nishikori became the first Japanese man in more than 80 years to reach the quarterfinals at the French Open as he breezed past Teymuraz Gabashvili of Russia 6-3, 6-4, 6-2 on Sunday.

In a nearly flawless performance that lasted less than two hours, Nishikori broke his opponent five times and hit 40 winners to follow in the footsteps of Jiro Satoh, who made it to the semifinals twice in Paris in 1931 and 1933.

"To (reach) the quarterfinals, that's the first goal for these two weeks," said Nishikori, who disappointed with a first-round exit at the French last year but rebounded by making the U.S. Open final.

"I knew I could do this because I was doing well during the clay-court season. I hope it's just the start of my journey, and I hope I can keep going."

After enjoying three days of rest, Nishikori was full of stamina on court Suzanne Lenglen and lost just six points on his serve in the opening set. The U.S. Open runner-up continued his demolition work as he raced to a 4-1 lead in the second set.

A brief change of momentum saw the 74th-ranked Gabashvili come back to 5-4 after Nishikori dropped his serve in the eighth game. That was the only scare for the fifth-seeded Japanese, who advanced from the third round without hitting a ball when his opponent pulled out of the tournament.

Gabashvili saved two match points in the seventh game before Nishikori sealed the match on his next service game to the delight of the fans waving Japanese flags.

Eighth-seeded Stanislas Wawrinka also advanced with an easy 6-1, 6-4, 6-2 win over Frenchman Gilles Simon in less than two hours. Awaiting Wawrinka in the next round will be the winner of the match between second-seeded Roger Federer against home favorite Gael Monfils.

That match was halted by darkness with the match tied at one set apiece and will be completed Monday.

Spurred on by his raucous fans on center court, Monfils leveled the match at 3-6, 6-4 with a backhand winner that left the 17-time Grand Slam winner stranded before play was called for the day.