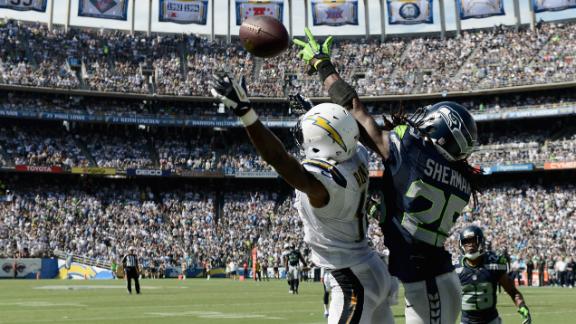 "He's just a normal guy," Allen said of Sherman. "We can go at him. We took some shots at him. We are not going to shy away from him. He's not really a shutdown corner. We definitely wanted to come out and show we could go any way we wanted to and that we were in control of the game."

Allen had five receptions for 55 yards in the 30-21 upset victory over the Seahawks at Qualcomm Stadium.

Unofficially, Chargers quarterbackPhilip Riverswas 5-for-5 passing for 60 yards while throwing to receivers Sherman was covering.

It was a much different strategy than Green Bay Packers quarterback Aaron Rodgers used in the 36-16 Seattle victory last week when Rodgers didn't throw one pass at Sherman.

"Keenan was lighting up Sherman,'' said Chargers receiver Malcom Floyd, who didn't have a catch Sunday but was targeted only once.

Sherman heard that the Chargers were saying he was "exposed" in the game. So he sent out this tweet afterward:

- Richard Sherman (@RSherman_25) September 15, 2014Sherman's numbers may have been off a little, but despite this heated debate between Allen and Sherman, that wasn't the big factor in the outcome of the game. It was San Diego tight end Antonio Gates, who had seven receptions for 96 yards and three touchdowns.

Sherman was not covering Gates.