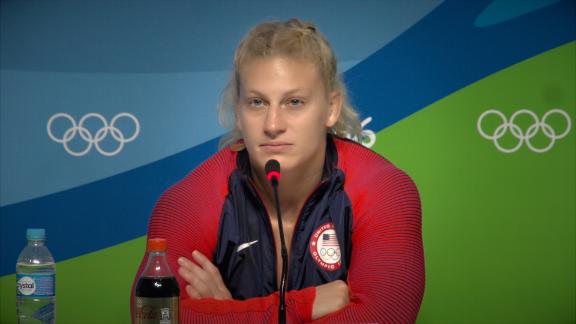 RIO DE JANEIRO -- Kayla Harrison does not intend to become the next Ronda Rousey. At least not now.

Harrison, 26, became the first American -- female or male -- to win two gold medals in judo Thursday and said she plans to retire from competing in the sport. But at the moment, she does not plan to follow Rousey, a bronze medalist in judo at the 2008 Olympics.

"It's just so different from judo," Harrison said. "It's such a different atmosphere from the Olympic stage. ... After a match in judo, you shake a person's hand or you give them a hug. You bow to them to show respect. MMA isn't like that. I don't know if I'm cut out for a world where you get fights based on how pretty you are and how much you talk, not necessarily what you've done in the ring.

"Right now, I'm going to be focused on being [a] two-time Olympic champion, enjoy the moment and live in the moment. Never say never, but right now, the answer is no to MMA."

Harrison says her goal is to help judo grow "to another level in the United States," though she acknowledged that being in MMA could give her a bigger platform to spread the word.

"I'm going to have to talk to [my coaches] and my manager and see what offers are out there and what it is that I'm going to do," she said. "Who doesn't want to be rich and famous at some point in their life? I yearn for that, but I also see the platform and see how many eyes watch MMA and how much reach I could have with something like that. Given that, it is tempting, but I just won an Olympic gold medal on the biggest stage in the world, so are there going to be more eyes there or where I am now?"

Harrison said she has received multiple offers from various organizations asking her to fight in MMA competitions, but she has so far turned them all down. Her coach, Jimmy Pedro, said he doubted she would turn pro, adding she was "too nice of a person" to do mixed martial arts.

After Harrison won the Olympic title in London, she vowed to retire from the competitive grind of the Japanese martial art. She wanted to focus on other things, like becoming a firefighter.

That goal, however, "kind of dissolved," she said. She is now planning to spend more time working on her foundation, Fearless, which aims to help victims of sexual abuse. Harrison herself endured years of sexual abuse by a previous judo coach.

On Thursday, Harrison became the first American to defend an Olympic judo title when she forced Audrey Tcheumeo of France to tap out in the final.

With just six seconds left in an otherwise scoreless final, Harrison trapped Tcheumeo in a move that threatened to break her arm, forcing her to submit and handing the American an automatic ippon victory.

"This is my legacy," Harrison said. "I retire as a two-time Olympic champ, one of the greatest the sport has ever seen."

Earlier, Harrison won two preliminary fights within minutes after pinning her opponents to the mat for 20 seconds.

Tcheumeo advanced to the final by beating Myra Aguiar of Brazil. Harrison and Aguiar had been expected to meet in the final.

"Judo is a sport where the margin of error is slim to none," Pedro said. "For Kayla to [defend her title] really is epic."

In the men's 100-kilogram division, Lukas Krpalek of the Czech Republic won the country's first judo gold after defeating Elmar Gasimov of Azerbaijan.

The men's bronze medals were won by Cyrille Maret of France and Ryunosoke Haga of Japan.