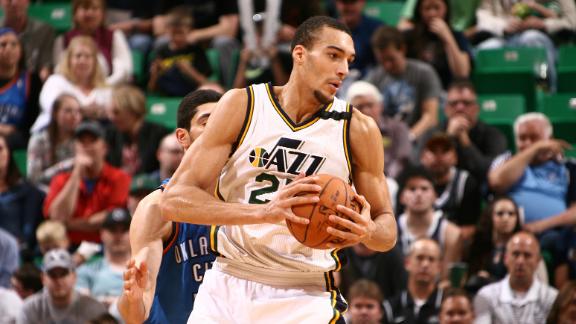 SALT LAKE CITY -- Returning to play against his former team Saturday night, Thunder center Enes Kanter claimed to have plenty more he could say about his tumultuous tenure with the Utah Jazz, but still didn't hold back all that much.

"I love it," Kanter said before the game of his change of scenery. "It's a team I've never experienced before and I actually like playing basketball there. I'm just so comfortable and everything is in the right place. I'm just really happy to be there."

And it showed, as he continued his hot streak with 18 points and 11 rebounds in a 94-89loss to the Jazz.

Kanter was booed during introductions and every time he touched the ball. He even egged on the crowd at the start.

"I am not taking nothing back."

Kanter has been an offensive revelation for the Thunder, putting up a double-double in eight consecutive games -- the longest streak for the Thunder/Sonics franchise since Shawn Kemp had 10 straight in 1996, according to ESPN Stats & Information.

Another telling stat -- Kanter has 23 assists with the Thunder. In 49 games this season with the Jazz, he had 26.

Kanter was part of a three-team trade on Feb. 19 that sent him and Steve Novak to the Thunder, Kendrick Perkins to the Jazz and Reggie Jackson to the Detroit Pistons. Selected third overall in 2011, Kanter spent his first three-plus seasons with the Jazz, but grew frustrated with his role and requested a way out of Utah.

"It wasn't just a one-game or two-game frustration," he said. "It was a 3-year frustration. I'm happy for both sides. I think it worked out well for both sides. I'm definitely happy that I'm part of the Oklahoma City team, a winner team, so I think it's going to go really well in the future."

What's so much different about the Thunder versus the Jazz?

"It's everything," he said. "The fans, the coaches, the team, the atmosphere is amazing. Everything is falling into place and I've never felt anything like that before. It's so different.

"It wasn't just basketball stuff. It was professionalism of the team. After I see in OKC, I see this is how NBA teams are. You know how you're like in a dream and you have a superpower and just don't want to open your eyes and end the dream? Oklahoma City's been like that to me."

Kanter was careful to point out that he would not consider his time with the Jazz a "nightmare."

"I did not say that. I still respect them," he said. "I still like my coaches here, I still have friends here, some friends here, not a lot. But still, I'm just saying I don't want to make no comments on them, but I think when after I went to OKC I was like, 'Oh man, this is how an NBA team is.'"

Kanter often found himself in a frontcourt logjam, entering the league as a rookie with Al Jefferson,Paul MillsapandDerrick Favorsin place. Then, the Jazz drafted Rudy Gobert. As a result, the team tried to reinvent Kanter's game a bit this season, using him more as a power forward that stretched out to the 3-point line. He attempted 41 3-pointers with the Jazz; with the Thunder, zero.

"I know I didn't bring it every night, but I think almost everything was a frustration," Kanter said. "But I'm still happy for both sides. It worked out well for both sides."

Jazz forwardGordon Haywardadmitted to having extra emotion and motivation to play the Thunder in the wake of Kanter's comments about the organization.

"Yeah there was, with things that were said by a former player. We wanted this one bad. We all heard what that former player said. It's just one of those things that, I think he pissed us off a little bit, honestly. We just wanted to make sure that we won."

"It's a great organization, great group of guys, great staff, great management, great coaching. So we aren't worried about what he said,"Trevor Bookersaid to contradict Kanter's comments about the Utah organization.

Kanter has found an immediate pick-and-roll connection with Russell Westbrook, taking advantage of all the attention the All-Star point guard draws.

Kanter will be a restricted free agent this summer, with the Thunder having every expectation to re-sign him. And with the way Kanter has talked about his new team, it would appear the feeling is mutual.

Asked what he likes so much about the Thunder, Kanter had plenty to say.

"First of all, we have a leader like Russell. And I love my teammates. The fans are amazing. I love the city, it's a clean city," he said. "Everything there is just professional. Everything they do is just for the players, you only focus on the basketball and just go out there and do your job.

"But like I said again, I really don't want to talk about it here again, because I have a lot of things to say, but I just don't want to say right now."

Does he miss anything about Utah? Cue a long, awkward pause.