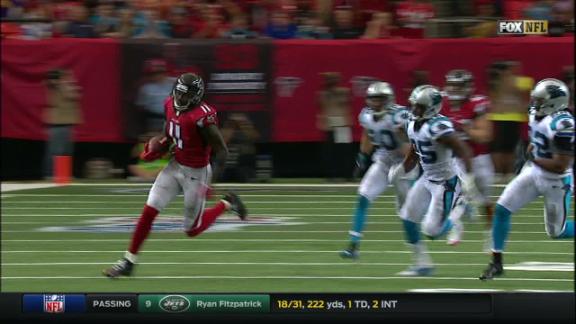 ATLANTA -- Atlanta Falcons wide receiver Julio Jones, held to one catch in his last outing, set a franchise record with 300 receiving yards in the Falcons' win against the Carolina Panthers on Sunday.

Jones hit exactly 300 yards on his 12th catch of the game -- a 75-yard catch-and-run touchdown from quarterback Matt Ryan to give the Falcons a 41-26 lead. Jones shattered his own record of 259 yards, set against Green Bay in 2014.

On the same play, Ryan set the franchise single-game passing mark with 503 yards, breaking his own record of 448 set against the New Orleans Saints in 2014.

Jones' effort Sunday was the sixth time in NFL history a receiver had at least 300 yards receiving in a game, and the first since former Detroit Lions wide receiver Calvin Johnson had 329 yards against the Dallas Cowboys on Oct. 27, 2013. Former Los Angeles Rams wide receiver Willie "Flipper" Anderson holds the NFL record with 336 yards against the Saints in an overtime game on Nov. 26, 1989.

"It's just for my brothers,'' Jones said. "We have a brotherhood here. We worked the whole offseason to create that. My success today is from them, just being out on the field with them.''

Before Sunday's game, Jones had four catches for 66 yards in a season-opening loss to Tampa Bay, five catches for 106 at Oakland, and then one for 16 yards (on seven targets) in Monday night's 45-32 win over the New Orleans Saints.

Jones, who has been battling a calf injury, had four catches for 94 yards in the first quarter alone Sunday and had seven catches for 170 yards at halftime.

"People said I had the worst three games of my career, but I don't think so,'' Jones said. "I'm going out there, they're doubling me. I'm taking double coverage, and others guys are working out there. It's a brotherhood. Today was my day. They singled me, and I came through and made some plays for the team.''

Jones breezes past defenders for 75-yard TD
Falcons QB Matt Ryan gets off an effortless pass to WR Julio Jones, who takes the ball 75 yards to the house to put the Falcons up 41-26 over the Panthers.

Jones won't put limitations on himself
Julio Jones considers his 300-yard game just an example of him not putting limitations on himself and says it was the key to getting the Falcons a win over the Panthers.
Related topics:
sportsespnatlanta falconsnfljulio jonesmatt ryan
Copyright © 2022 ESPN Internet Ventures. All rights reserved.
TOP STORIES
'It was like a mad dash:' Clear Creek ISD senior set to graduate
Man dead after being shot during road rage incident, HCSO says
CDC recommends wearing masks indoors, ahead of Memorial Day weekend
Scattered storms move in tonight ahead of front
Murder suspect dead after found unresponsive in cell, sheriff says
Astros fan from Spring celebrates 95th birthday with favorite team
Child hospitalized after found 'unresponsive' at Splashtown
Show More
Runner dies after collapsing at finish line of Brooklyn Half Marathon
Global K-pop sensation Seventeen kicks it in Houston in new tour
'NFTs: Enter the Metaverse' | Trailer
Authorities search ends for man with felony warrant out for his arrest
Early Voting holds off Epicenter to win Preakness Stakes
More TOP STORIES News