Josh Hamilton asks for day off 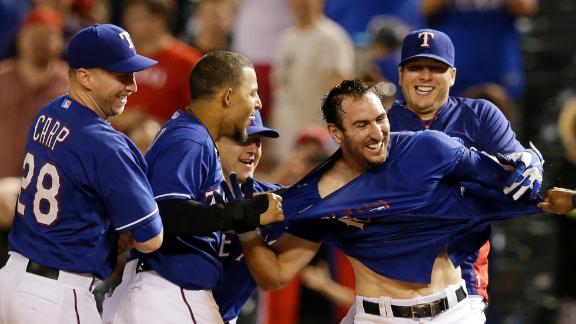 ARLINGTON, Texas -- Mired in a season-long slump, Los Angeles Angels slugging outfielder Josh Hamilton took himself out of Sunday's lineup against the Texas Rangers for a mental break.

"Yeah, I asked [Angels manager Mike Scioscia] could I have a day because I felt like I was spinning my wheels and felt like I wasn't getting anywhere," Hamilton said after the Angels' 3-2 loss to the Rangers on Sunday. "So sometimes it's good to do that and take a step back."

Hamilton, hitting just .266 with eight home runs and 35 RBIs this season, is in the middle of a four-game hit streak. However, Hamilton has just three RBIs and two home runs this month.

Scioscia said his cleanup hitter is playing without confidence.

"Josh is not the same as he was when we were looking in the other dugout in Texas," Scioscia said Saturday. "Right now, he's not in the batter's box with the confidence that we know he has. He's working hard to try to find it."

"Yeah, that's the majority of what the game is about, having confidence in what you do and knowing you're capable of doing things on a daily basis to help the team win," Hamilton said. "The less successful you are, the less confidence you have, and so it's just a big cycle. If you can get some hits and some flairs and broken bats like that, it will help that confidence and hopefully those types of things will start happening."

While in Texas, Hamilton won the 2010 AL MVP award, was a three-time Silver Slugger award winner and had 506 RBIs in five seasons.

Hamilton had a close relationship with Rangers manager Ron Washington, and much like Scioscia, Washington gave him a day off when asked.

While with the Rangers, Hamilton also had a support system that included a family friend who would travel with him to every road game because of his previous issues with drug and alcohol abuse.

Hamilton still has someone travel with him on the road, with the exception of when he comes to Texas, but his interaction with that person has been reduced since joining the Angels.

"I felt like it was a positive and responsible growing up lesson," Hamilton said, referring to having a person around less with the Angels than with the Rangers. "As far as getting less interaction in the clubhouse with somebody being around all the time and getting to know my teammates better and spend more time with them and really become a part of the team. So that's why we choose not to have somebody around all the time."

Part of Hamilton's current woes at the plate could be tied to the nearly two months he spent on the disabled list this year with a torn ligament in his left thumb. Prior to the injury, which occurred in early April, he had been batting .444 with two homers.

"Yeah, you think about playing, you think about you're going to have struggles," Hamilton said. "The whole reason guys are at this level, majority-wise, is because they can get out of their slumps and get out of their slumps quicker than most people. So I'm having a little trouble, something that never really happened to me as far as getting out of [a slump]. So I'm working on it and I took a down day today and rest my mind and stop thinking about it and pick it back up tomorrow."