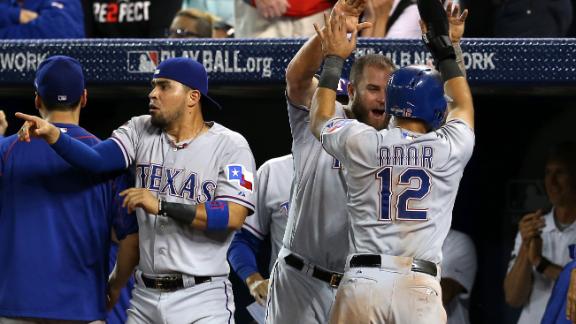 TORONTO --Toronto Blue Jaysoutfielder Jose Bautista took aim at Major League Baseball's replay system Friday after a critical call that went against the Blue Jays in the 14th inning was upheld by the replay center in New York, giving the Texas Rangers a chance to score the go-ahead run in their 6-4 victory over the Blue Jays in Game 2 of the American League Division Series.

"I would like to hear an answer from the replay booth in New York on why they made that decision,'' said Bautista, who thought his throw behind Rangers baserunner Rougned Odor had caught him off second base. "I know that's not part of the protocol, and it seems to be convenient that it's not.

Bautista believed that a crew chief-ordered replay of the tag play at second base should have resulted in a reversal of the call made on the field by second-base umpire Marvin Hudson, who called Odor safe at second after he dove back into second on Bautista's throw.

Odor, who had beaten out an infield hit, left for second on a base hit to right by Chris Gimenez and rounded a couple of steps beyond the bag. Bautista, who fielded the ball, fired his throw into second, where Jays shortstop Troy Tulowitzki tagged Odor and kept his glove on the baserunner -- long enough, the Jays contended, for Odor to come off the bag.

Toronto manager John Gibbons requested a review from crew chief Dale Scott. Replay officials let the call stand because replays were inconclusive. Odor remained at second and scored the go-ahead run when the next batter, Hanser Alberto, followed with an RBI single.

A spokesman for Major League Baseball said that after viewing all relevant angles, the replay official "could not definitively determine that the runner's foot lost contact with the base at any time while the tag was being applied. The call STANDS. The runner is safe."

"I saw it during the game," he said. "They replayed it on the big screen."

Tulowitzki claimed he had not watched a replay.

"Obviously, it was a big play," he said. "Initially, I wasn't quite sure. I didn't get a chance to look at the replay.

"I think any time in today's game, with the replay, any time there's a close play, you always try to keep the tag on. That's what I was doing there. Apparently, Gibby called, it was close enough to review, but unfortunately, it didn't go our way.''

Pitcher LaTroy Hawkins, who took the loss after giving up three straight singles with two outs and nobody on, said he hadn't watched a replay.

"I didn't watch it yet," he said. "I heard guys say he was out. I know one thing: I've got to make better pitches there.''

Gibbons thought the Jays had a shot at the call being reversed.

"From what we saw on the board, it looked like there might have been a little gap,'' he said. "Whether enough to overturn or not, apparently not. So that's the way it goes.''

Bautista has expressed his disapproval of the replay system before. In July 2014, he took issue when a review upheld thatMelky Cabrerawas thrown out at the plate to end the eighth inning of a 5-1 loss to theOakland A's.

"This whole replay thing has become a joke in my eyes," Bautista said after that game. "I think they should just ban it. They should just get rid of it. I don't really understand the purpose of it, but getting the right call on the field is not the purpose. That's pretty obvious and evident."

Several members of the Blue Jays also took exception to the strike zone called by plate umpire Vic Carapazza, with catcherRussell Martinthinking that Carapazza was squeezing Jays starting pitcher Marcus Stroman with some of his ball-strike calls.

"If this was a regular-season game, there's a pretty good chance I get thrown out of that game,'' Martin said. "I tried to talk to him [Carapazza]. Sometimes umpires have a hard time seeing the ball and getting a feel for it.''

Carapazza, a fifth-year umpire working his second postseason, is no stranger to October controversy. Last year, in his only other postseason assignment behind the plate, Game 2 of the division series between the San Francisco Giants and Washington Nationals, Carapazza ejected Nationals second basemanAsdrubal Cabreraand manager Matt Williams for arguing ball-strike calls after Cabrera was called out on strikes in the 10th inning. The Giants went on to win 2-1 in 18 innings.

Jays center fielder Kevin Pillar struck out in each of his last three at-bats and barked at Carapazza after he was called out in the 13th with the potential winning run on first base and one out.

"Are you trying to get me in trouble?'' Pillar said when asked if he had issues with the strike zone. "I need someone's advice. Are you trying to throw me under the bus or do you want my opinion? I don't think my opinion is best suited for this many people.''

Pillar said his biggest issue Friday was over what he perceived as an inconsistent strike zone. "Whether it's big or small, all that everyone asks for in this clubhouse is consistency,'' he said. "You call one pitch down, don't call the next one a strike. You call one up, don't miss the next one. It's very difficult as a hitter to try to anticipate what the pitcher is going to throw you [and] battle a third party behind you, especially when you think you have an understanding of the zone. When [the zone] constantly changes, it makes our job very difficult.

"You got to pick a side, up, down. It can't change,'' he said. "The game is extremely difficult, but when the plate starts expanding, it makes it even more difficult. If they want the zone bigger, make the plate bigger.''

Gibbons downplayed the issue. "There was complaining on both sides,'' he said, "but that's behind us.''

Martin, who was called out on strikes twice, once shaking his head as he made his way back to the dugout, alluded to some "questionable calls" made against Blue Jays hitters.

"It's definitely frustrating,'' he said, "but we had tons of opportunities to win that game, and we didn't come through. You can't blame the umpire.''

The Jays did not score after the fifth inning and had just two singles over the final seven innings against five Texas relievers:Ben Revere's single in the eighth off Sam Dyson, and Chris Colabello's single in the 12th off Shawn Tolleson.