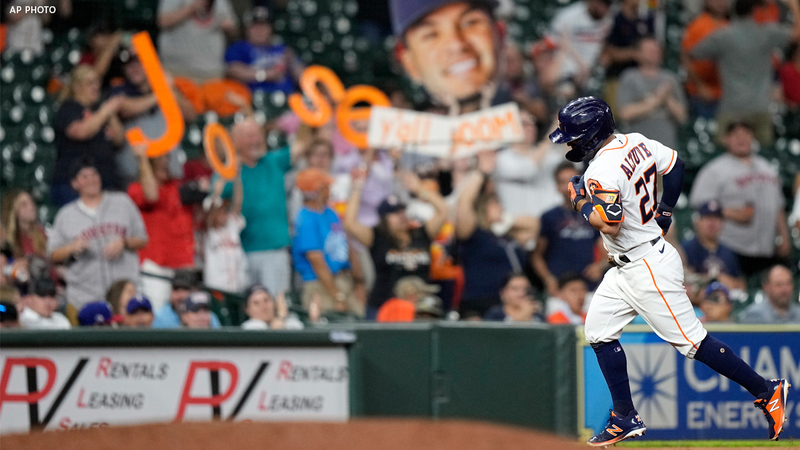 HOUSTON, Texas -- Jose Altuve started this game the same way he ended the one before.

Altuve homered twice and made major league history by hitting a leadoff homer one game after belting a walk-off grand slam to lead the Houston Astros over the Texas Rangers 8-4 on Wednesday night.

Altuve, whose grand slam in the 10th inning Tuesday night lifted the Astros to a 6-3 victory, became the first player to launch a leadoff homer in the game after hitting a walk-off slam, according to STATS.

"This is a remarkable streak that he's on," Houston manager Dusty Baker said. "He's swinging like a power hitter."

Altuve was not made available to reporters after the game.

The diminutive second baseman connected again with a shot to the train tracks atop left field with two outs in the eighth inning to extend the lead to 8-4 and give him his fifth career multi-homer game.

"It's some of the craziest things I've seen from a baseball player," Houston outfielder Myles Straw said. "But I'm not surprised. He's one of the best players I've ever seen."

Altuve's leadoff drive was one of a career-worst four homers allowed by Jordan Lyles (2-5) that put the Astros up 5-1 early. McCormick, Martín Maldonado and Straw also connected off Lyles, who began his career in Houston.

"They made me pay for most of my mistakes over the plate," Lyles said. "This is a very good lineup. Every ball that I threw over the plate went for an extra-base hit or over the wall. I've got to do a little bit better command-wise."

McCormick's second homer came against Taylor Hearn in the sixth.

Houston starter Zack Greinke (7-2) permitted four hits and three runs in 5 2/3 innings to bounce back after allowing seven hits and four runs over three innings in a loss to Boston last time out, the shortest outing of his Astros career.

"It was a semi-sharp game," Greinke said. "I didn't make a lot of good pitches the last inning. But overall, just a lot of decent stuff."

Houston played most of the game without third baseman Alex Bregman after he exited with a strained left quadriceps he injured running to first base in the first inning.

Baker said he didn't know the severity of Bregman's injury, but the slugger could be out for "a while."

"The way he walked into the clubhouse, it wasn't a good sign," Baker said. "You hate to lose him for any amount of time."

Lyles plunked Carlos Correa with one out in the second before McCormick's home run to right field made it 3-0. Maldonado connected on his solo shot with two outs in the second and Straw hit his first home run of the season in the fourth.

Texas rookie Eli White hit the first two home runs of his career with solo shots in the third and seventh as the Rangers lost for the fourth time in five games. Nick Solak had a two-run single in the sixth that cut the lead to 5-3 before McCormick's second homer.