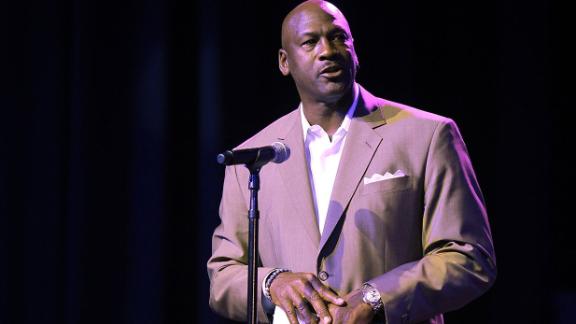 Michael Jordan can be found near the top of seemingly every list that mentions his name.

He's not close to the top of a new one, but he'll probably be just fine with that.

Forbes magazine revealed its 29th annual World's Billionaires List, and Jordan made the cut for the first time. With an estimated net worth of $1 billion, Jordan qualifies as the 1,741st richest person in the world, the magazine said.

It is believed that Jordan makes more than $100 million a year off royalties from his Nike Air Jordan line, though his business manager Estee Portnoy has never confirmed those numbers. Portnoy said Monday that "we did not comment nor participate in the financial guesstimates" made by Forbes.

In March 2010, Jordan agreed to buy 80 percent of the Charlotte Bobcats on a valuation of about $275 million. Jordan's stake -- as arranged in the original deal -- jumped to 89 percent in 2013. Forbes estimates the team, which changed its name to the Hornets this season, is now worth more than $700 million.

The billionaires list is packed with other sports owners. The richest team owner is Steve Ballmer, who bought the Los Angeles Clippers for $2 billion last year. Ballmer is the 35th richest person in the world with a net worth of $21.5 billion. His former Microsoft colleague Paul Allen comes in at No. 2 among team owners. The Seattle Seahawks and Portland Trail Blazers owner is the 51st richest person in the world, Forbes says, with a net worth of $17.5 billion.

Phil Anschutz, who owns the Los Angeles Kings and the L.A. Galaxy and Houston Dynamo of MLS, as well as the Staples Center, comes in as the third richest sports owner with a net worth of $11.8 billion.