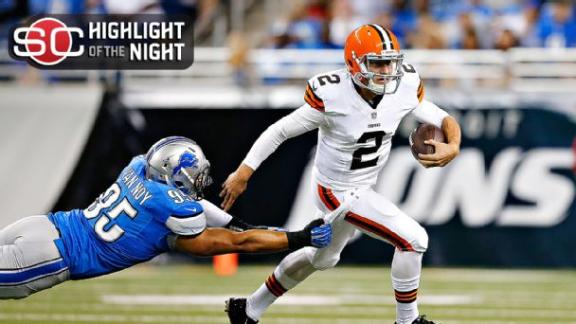 DETROIT -- Johnny Manziel's first professional game action had moments, but was uneventful for the most part.

Both Manziel and Brian Hoyer each enjoyed a bit of success, but very little was answered about who eventually will be the Cleveland Browns' opening day starter.

"We kind of killed ourselves with some things," Hoyer said. "There are definitely a couple reads I would like to take back and a few throws, but for the most part it's good to get out there and play against someone else."

Hoyer played the first quarter and half of the second, completed 6 of 14 passes for 92 yards with no touchdowns (but a few drops) and two missed third-down overthrows against the Detroit Lions.

"We kind of hurt ourselves," Hoyer said. "For me, I had a bad read on one third down. We just have to continue to improve when the live bullets are flying. We can't settle for three, we've got to score touchdowns."

Manziel played until the fourth quarter, started slow and gained a rhythm the more he played. He finished 7-for-11 for 63 yards with six rushes for 27 yards.

Neither quarterback could find the end zone as the Lions won 13-12 in a game that has come to be known as the Great Lakes Classic.

"There's definitely a few throws that I would want to have back and put in a better spot," Hoyer said, "But to have ACL surgery and be back out there playing is definitely a step forward."

"For me it was a good start," Manziel said. "Have to start somewhere and set a foundation."

However, he admitted things were not perfect.

"Luckily for me there's three more games to get out there and learn," Manziel said.

Manziel's first night mirrored his training camp. He started slow, made some plays with his feet and grew more comfortable as the night went on.

His first drive started with a six-yard completion to Anthony Armstrong, but ended in an ugly way as Manziel was stuffed trying to run off a read-option call on third-and-1 from the pistol formation.

The Lions held the ball for much of the first half, leaving Manziel only to kneel to end the frame.

He spent another series in the pistol, but started to complete throws when he moved under center. One of the rookie's better throws was to Taylor Gabriel for 18 yards off play-action.

Manziel ran 16 yards for a first down, threw a nice crossing route to Charles Johnson and threw what could have been a third-down conversion to Willie Snead, but it went through the receiver's hands.

Manziel was very quick in the pocket and able to elude the rush. He took a couple shots and was briefly checked on the sideline, but kept coming back.

But neither Hoyer nor Manziel did enough in this game to take firm hold of the starting job. Both seemed to finish the game where they started it.

The biggest question the Browns must now answer is whether they want Manziel to start the second preseason game against Washington, as it would give him an opportunity to play with and against the first units.

Browns coach Mike Pettine said he could not comment on whether the game provided much clarity on the quarterback situation until he watched the tape.

"That decision has not been made yet," said Pettine.

A source, however, told ESPN's Bob Holtzman that there is a "very good chance" Manziel will get the start when the Browns face the Redskins on Aug. 18.

Johnny Manziel Makes Debut For Browns
SportsCenter Highlight of the Night: Johnny Manziel threw for 63 yards and rushed for 27 yards in the Browns' 13-12 loss to the Lions.

Manziel Talks Debut
Johnny Manziel comments on his performance in the Browns' 13-12 preseason loss to the Lions.