John Calipari: 2016 UK recruiting class 'could be one of our best ever' 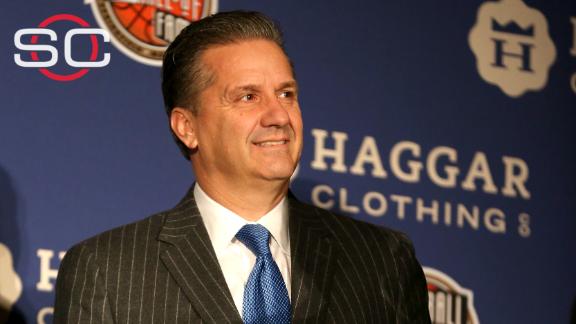 Kentucky coach John Calipari said the recruiting class he's working on for 2016-17 could be the best he has ever assembled.

"This year's recruiting class, where we're in the middle of right now, could be one of our best ever," Calipari said. "The kids that I'm seeing, that we're involved with, that I feel really good about. This could be our best class ever. And that's a pretty scary statement coming from who we've been able to recruit over the last 25 years."

Kentucky could have had Jamal Murray in next year's class, too, but he reclassified to play next season for the Wildcats. Murray averaged 16 points per game for the silver-medal-winning Team Canada at last week's Pan Am Games in Toronto, and he scored 22 points in an overtime victory over the United States in the semifinals.

Murray will team up with returning guard Tyler Ulis and newcomer Isaiah Briscoe to form a formidable perimeter.

Calipari said Murray can now accomplish what Karl-Anthony Towns did last season with Kentucky -- become a star by coming to Kentucky a year ahead of schedule.

"I think he'll come in and be able to score for us," Calipari said. "You watch that game [against Team USA], you've gotta put the ball in his hands. We knew he was good, we had recruited him, so we knew, we just weren't sure he'd reclassify. ... If you're a smart kid and you can leave that year early, like Karl Towns, and he ended up being the No. 1 pick. He should've gone back to high school? When you're of the right age and you have the academics, you should do it. That's what we didn't know about Jamal."

In the Pan Am Games, Murray went up against Gonzaga's Mark Few, who was coaching Team USA. Few, who was also on the podcast, gave Murray high praise.

"I was very impressed,"Few said. "We had scrimmaged Canada right when we got to Toronto. In the scrimmage he was solid, steady, but didn't do a whole lot. But boy, when the lights came on up there he played very, very well. Showed a lot of moxie, a lot of poise, just the ability to know when the moment was big to step up and make big shots."

Few is also high on his own team. The Zags lost guard Kevin Pangos, but Few said he has the best frontcourt in the country in Przemek Karnowski, Domantas Sabonis and former Kentucky player Kyle Wiltjer, who is back for another season in Spokane.

"When you have three guys like Kyle, Karnowski and Sabonis, I think that's the best frontcourt in all of college basketball," Few said. "So, they're all different, they bring all kinds of high-level basketball talent and skill to the table."

Calipari said that five or six Kentucky players could go in the NBA draft next season: Alex Poythress, who's returning from a knee injury; Ulis; center Marcus Lee;and newcomers Murray, Briscoe and Skal Labissiere, who could be a top pick (although LSU newcomer Ben Simmons is the projected favorite for that honor next year).

"You know Skal, they're talking about as a possible No. 1 pick,"Calipari said. "He's got a ways to go. Great kid, working hard. Gotta get into the mix of games, the toughness and all of that stuff, then he's going to grow just like Karl did ... [Towns] was never talked about, he was an afterthought.

"The other kid [Jahlil Okafor, who went No. 3] was always going to be No. 1, it was never even close. It was a foregone conclusion, and by the end Karl just kept making strides, making strides and then he was like unanimous. No one could've taken anyone else. So, I see Skal on that same path. Early on you're going to say, 'Well, I really like him, but he ...' -- and then at the end of the year you're gonna say, 'This kid is ridiculous.'"

Gonzaga opens up against Pitt in the Armed Forces Classic in Okinawa, Japan, on Nov. 13 while Kentucky hosts Albany on the same date. Kentucky should be a top five team to open the season while the Zags will hover near the top 10.