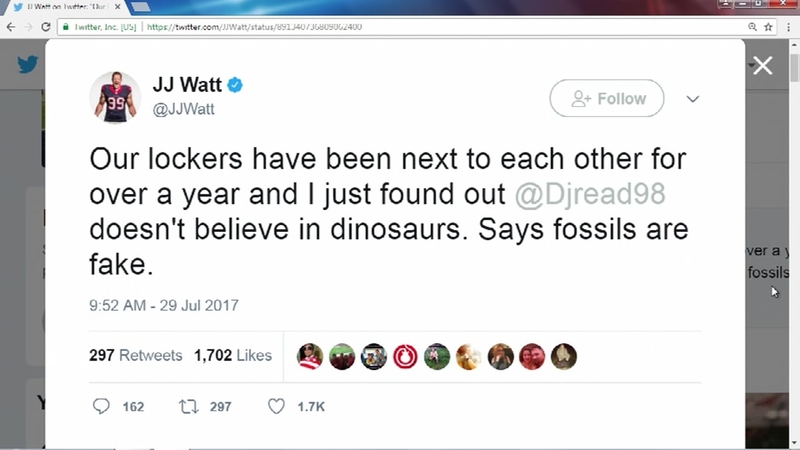 HOUSTON (KTRK) -- First we had Kyrie Irving sparking debate with his belief that the Earth is flat, and now we have Houston Texans defensive tackle D.J. Reader stirring controversy by saying there were never any dinosaurs.

The online backlash started Saturday when teammate JJ Watt tweeted, "Our lockers have been next to each other for over a year and I just found out @Djread98 doesn't believe in dinosaurs. Says fossils are fake."

Our lockers have been next to each other for over a year and I just found out @Djread98 doesn't believe in dinosaurs. Says fossils are fake.

Twitter was quick to respond. Some in support, but a majority were against.

Dude. If dinosaurs aren't real, then The Land Before Time can't be real either. Don't mess with my childhood like that😂

I've never killed a cow, but I still believe in prime rib. 🐄 😎

Real talk. Aliens exist? Earth is flat or round? These are the important ones. Dinosaurs just bones from the past, I'll let it slide

@Djread98 I thought I was alone with this 😂... dinosaurs never existed

Some Houstonians wanted to take Reader to the Houston Museum of Natural Science where they have a large collection of fossils.

Disabuse him of his misbeliefs. Take him to a natural history museum.

It looks like the teammates will have quite the locker room debate this season.

Look what you started man @JJWatt

Ay man, I'm not the one who said it! I love you either way cuz you're my boy. I just had to see if anybody had your back. (They don't) https://t.co/zCznG0dknD