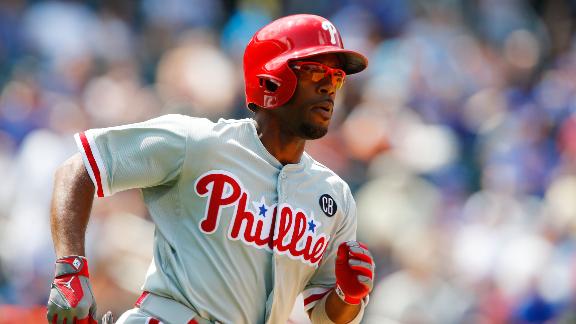 Jimmy Rollins has been traded to the Los Angeles Dodgers, ending his 15-year stint with the Philadelphia Phillies, sources told ESPN The Magazine's Buster Olney.

It is unclear what Philadelphia acquired in exchange for the 36-year-old Rollins, a three-time All-Star shortstop who won the National League MVP in 2007.

The trade marks the end of Rollins' historic run in Philadelphia, where he spent his entire career. Rollins is the franchise's all-time leader in hits, at-bats and doubles, and was one of the key contributors to the Phillies' World Series championship run in 2008.

The Dodgers had been seeking a veteran shortstop to replace Hanley Ramirez, who signed as a free agent last month with the Boston Red Sox, and to bridge the gap until their top position prospect, Corey Seager, is ready.

The switch-hitting Rollins was one of baseball's top offensive shortstops in his prime and has 453 career stolen bases, the fourth-most among active players.

Seager, 20, finished last season at Double-A Chattanooga. The Dodgers' other in-house option, Erisbel Arruebarrena, is unproven as an every-day player and carries serious question marks about his ability to hit.

They traded away another option, Miguel Rojas, late Wednesday as part of a flurry of moves.

They then flipped Heaney to the Los Angeles Angels in exchange for Howie Kendrick.