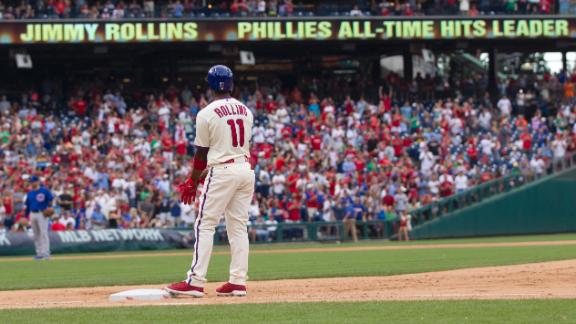 Now that he is the Philadelphia Phillies' all-time hits leader, Jimmy Rollins is open to the possibility of continuing his career elsewhere.

Rollins, who passed Hall of Famer Mike Schmidt atop Philadelphia's hit list Saturday, told reporters that he would consider waiving his no-trade rights if the last-place Phillies "blow everything up."

"It really depends if everything is blown up," Rollins told reporters. "Then you take that into consideration. If they blow everything up, then of course."

Rollins, who can veto any trade proposal as a 10-and-5 player, firmly stated in March that he would not waive that right, citing Schmidt's franchise hits record as one of the reasons he wanted to remain with the Phillies. The 15-year veteran reached that milestone in the fifth inning Saturday against the Chicago Cubs, lacing a single to right field for his 2,235th career hit.

Rollins' pursuit of Schmidt's record has been one of the few bright spots this season for the Phillies (29-37), who are in last place in the NL East despite a $180 million team payroll -- the third-highest in the majors.

Rollins, who will make $11 million this season and has an $11 million vesting option for 2015, is one of several high-priced veterans that general manager Ruben Amaro Jr. could look to deal away prior to the July 31 non-waiver trade deadline.

But despite softening his stance on his no-trade rights, Rollins maintained that he would prefer to remain in Philadelphia.

"Fortunately, I don't have to worry about that right now," the shortstop told reporters. "But if that time does come, and it's time to go ... people move on.

"We have six weeks. We can make it difficult on Ruben. The division hasn't gotten away from us at all yet. Hopefully we have a little magic left."

Despite their slow start, the Phillies entered play Sunday just 5.5 games behind the Atlanta Braves and Washington Nationals, who are tied for the division lead.

In 15 years with the Phillies, the 5-foot-8 Rollins has won four Gold Gloves, made three All-Star teams and was the 2007 NL MVP. He was a member of the club's 2008 World Series championship team.

Rollins is one of 19 players in major league history with at least 400 doubles, 100 triples and 200 home runs. He is fourth all-time with 46 leadoff homers.