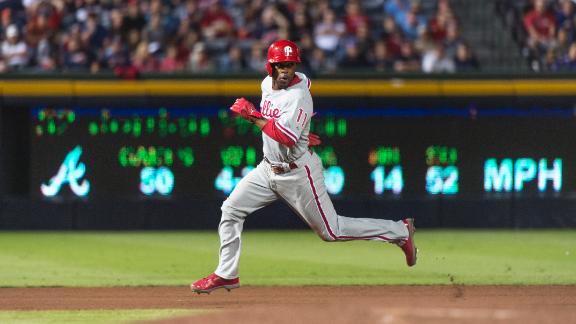 Jimmy Rollins says he's unfazed by a report that the Philadelphia Phillies could look to trade the veteran shortstop.

Rollins, who was drafted by the Phillies in 1996, has the right to veto any trade proposals as a 10-and-5 player. He told CSN Philly on Sunday that he won't waive his no-trade rights anytime soon, indicating that he'd like to break Mike Schmidt's franchise record for hits. Rollins has 2,175 hits, 60 shy of Schmidt.

On Tuesday, ESPN The Magazine's Buster Olney, citing sources, reported that there is strong sentiment within the organization that the Phillies would be better off trading Rollins and establishing a new tone with a new shortstop.

Rollins was benched on three successive days earlier this month by Ryne Sandberg, who is in his first full season as manager. The two talked and Sandberg downplayed the notion of a rift.

"Absolute silliness," Amaro told the website when asked about the report. "Jimmy Rollins is our shortstop. One of the ways we're going to be able to win is with Jimmy being Jimmy.

"We have no intention of moving Jimmy. We need Jimmy to play for us to win. It's as simple as that."

Asked if Rollins needed to be a better leader, Amaro told MLB.com, "I don't have any issues at all with Jimmy."

Information from ESPN The Magazine's Buster Olney was used in this report.