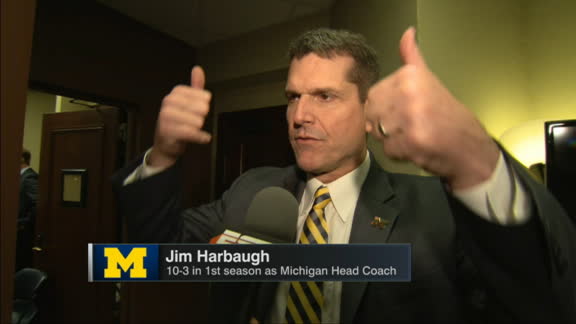 ANN ARBOR, Mich. -- It was clear from the start Wednesday that Jim Harbaugh's second national signing day at his alma mater would be unlike any other before it.

The lines to get into Hill Auditorium on Michigan's campus stretched around the block at 10 a.m. Wednesday for Harbaugh's "Signing With the Stars" event. When the doors to the 3,500-seat auditorium opened 30 minutes later, fans were greeted by a maize-and-blue storm trooper posing for photos and cardboard cutouts of the Wolverines' newest football players.

Dozens of celebrities from sport, song and stage participated in a two-hour event that blended elements of awards shows, the NFL draft and late-night talk shows. The result was an unprecedented headline-grabbing bonanza that ostensibly served to introduce Michigan's highest-rated signing class -- sixth overall in the ESPN rankings -- in more than a decade.

Tom Brady and Harbaugh discussed global warming. Septuagenarians Jim Leyland and Lou Holtz dabbed on stage while the rap duo Migos supervised. Baltimore Ravens coach John Harbaugh stopped by, and former professional wrestler Ric Flair revealed that he signed a letter of intent to play for the Wolverines in 1968.

The surreal event was live-streamed by Derek Jeter's The Players' Tribune website. The Players' Tribune hired a production firm that has previously coordinated events such as the Webby Awards and MTV shows to help put the show together. Executive producer Matthew Mills said Harbaugh stayed involved in much of the three-week production process and the six weeks of planning before that.

Jeter was one of several celebrities who came onstage to introduce individual members of Michigan's signing class.

"He's brought excitement back to the university and the program as you can see today," Jeter said of Harbaugh.

A highlight film for each new signee played for the crowd while their strengths were broken down by Holtz, ESPN analyst Todd McShay and former NFL head coach Mike Shanahan at a news desk on one side of the stage. On the other side, Harbaugh lounged with some of his celebrity guests and the team's early enrollees on black leather couches.

"I was not expecting something like this, something so big," said new quarterback Brandon Peters, who was introduced to the crowd by Brady. "I've always looked up to Tom Brady. It was kind of breathtaking meeting him. Sitting there with him and shaking his hand was pretty awesome."

Brady was asked how different Wednesday's event was from when he signed to play for the school.

"Our biggest recruiting day was last year, when we got Coach Harbaugh back," Brady said. "I've competed against him, and lost."

Harbaugh cracked in response, "Can we get that in writing?"

Further bursts of stardom were sprayed into the proceedings in rapid-fire videos welcoming the new class to Michigan. Those cameos included comedy duo Owen Wilson and Vince Vaughn, actor Verne Troyer, NFL Network's Rich Eisen and ESPN's Jalen Rose, among many others.

A crowd of more than 3,000, many of them current Michigan students, twirled glowsticks at one point and belted out a version of the university's fight song led by former quarterback Devin Gardner later in the afternoon.

The cost of admission was a donation to the ChadTough Foundation, a group that funds childhood brain cancer research. The foundation was started by the family of Chad Carr, the 5-year-old grandson of former Michigan coach Lloyd Carr who died in November. Harbaugh paused with the stream of celebrities onstage for a few minutes to introduce Chad's mother and highlight the charity and its efforts.

Before he made his exit, Brady reminded the new players that their college experience wouldn't always be such a high-profile, star-studded existence.

Oregon coach Mark Helfrich, for one, said he prefers being "real" with the Ducks' recruits.

Asked about the Ducks' perceived low-key recruiting approach, Helfrich said: "I don't think low key. I think real, in reality. We're not different. I love that guys can see us at practice or see us deal with guys that we don't recruit one way and then on Feb. 4 change. That's never going to happen. ... We're trying to be real with these guys and as open and honest about them positionally, where we see them fitting, how they're going to develop as a man, all the things that we kind of hit on. There's just not a lot of reality in some of those things, in my opinion."

Harbaugh said he was aware that such an extravagant show would draw criticism. He also said he expects he'll need to up the ante next year to stay in front in the copycat world of recruiting.

"I think people will either do something similar or they'll criticize," he said. "It worked for us. It was wonderful for us. And why not? We'll be back to work at 2:30, but why not have some fun?"

ESPN's Chantel Jennings and The Associated Press contributed to this report.