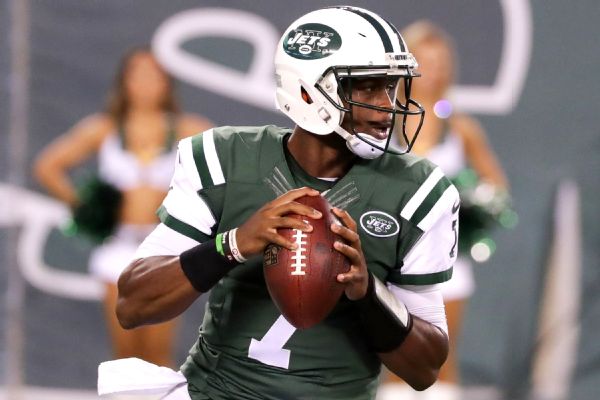 FLORHAM PARK, N.J. --New York Jets coach Todd Bowles put his signature on the decision to bench Ryan Fitzpatrick in favor of Geno Smith, claiming there was no interference from management or ownership.

"This was strictly my call," Bowles said Wednesday.

Bowles gave Fitzpatrick a vote of confidence after Monday night's 28-3 loss to the Arizona Cardinals, but he hedged on that in a Tuesday afternoon conference call with reporters, saying he needed to discuss it later that night with his staff. The flip-flop, out of character for Bowles, fueled speculation that perhaps owner Woody Johnson had demanded a change.

Interestingly, both quarterbacks said they received the news from Bowles on Tuesday. Neither player offered a specific time, but presumably it was before the evening staff meeting.

Smith will start Sunday against the Baltimore Ravens, his first start since Dec. 28, 2014.

Smith reclaimed the job he lost in August 2015, when he was punched by then-teammate IK Enemkpali in a locker room altercation. His jaw was broken, and by the time he returned, Fitzpatrick was on his way to a career year.

Wide receiver Brandon Marshall praised Smith for gaining maturity over the past year, but his choice of words was odd.

"It's amazing to see this guy grow and punch adversity in the face," Marshall said.

Smith, who handled mop-up duty in Monday night's loss, downplayed his promotion, saying he wanted to keep the focus on the team. He didn't want to reflect on his usual journey.

"There will be a time and place for that, but this isn't the time or the place," he said.

The current situation is bleak. The Jets (1-5) have dropped four in a row, having managed only three touchdowns in that span. Fitzpatrick leads the NFL with 11 interceptions.

"We didn't gel and come together like we did last season," Bowles said, explaining his decision. "We haven't been producing, so I thought it was time to make a change."

It was a different tone on Monday night. After the game, Bowles exonerated Fitzpatrick, saying no quarterback could've succeeded because of the pass-protection issues. He claimed that Fitzpatrick "would be back next week. ... Fitz is our starter."

Bowles said he wanted to discuss the matter with his staff and general manager Mike Maccagnan as a matter of protocol. He acknowledged that he also spoke to Johnson. Asked if he spoke to the owner before the decision, Bowles said, "We talk all the time."

He said Fitzpatrick and Smith are "guys of equal talent ... and when one isn't playing as well, you turn to the other one, and that's what we did."

The change put Marshall in an awkward position. He was reminded of his comment from a few weeks ago when he said he'd stick with Fitzpatrick even if the boat goes down.

Smith may only be a bridge to one of the young quarterbacks, Bryce Petty or rookie Christian Hackenberg. Bowles didn't rule out the possibility of promoting one of them at some point. He said they're operating on a week-to-week basis.

Petty needs more practice time because he's only one week removed from a five-week shoulder injury, according to Bowles, adding that Hackenberg "isn't ready." The Jets probably would wait until they're mathematically eliminated before turning to an inexperienced quarterback.

They're the only team with four quarterbacks on the roster. Petty and Hackenberg are under contract for 2017; Smith and Fitzpatrick will be free agents.

This is a stunning fall for Fitzpatrick, who, after a long stalemate, signed a one-year, $12 million contract on the eve of training camp. He was considered the missing piece for a team that almost made the playoffs last season, but he hasn't been able to recapture that level of play.

Fitzpatrick will be the No. 2 quarterback on Sunday.

Smith, a second-round pick in 2013, compiled an 11-18 starting record in his first two seasons. He flashed occasional glimpses of potential, but he had 34 interceptions and 71 sacks in those two years.

Smith worked with the starters during Fitzpatrick's contract dispute in the offseason, but he went back to the bench when Fitzpatrick signed. In several interviews, Smith said he was "pissed off."

On Monday night, he told ESPN sideline reporter Lisa Salters he was "antsy" to play. He also expressed frustration on the sideline, flinging his baseball cap at one point.

That resulted in a public rebuke from Bowles, who backed off that on Wednesday. Bowles described Smith's comment as "gossip," adding that "it's a waste of my time" to discuss.

Man who died during police incident had Houston ties

Protesters to Minneapolis officers: 'He begged you for his life'
Gov. Abbott addresses occupancy citations for violators
2 men injured after shooting near popular restaurant in southwest Houston
HFD steps in after 550 complaints when bars, clubs reopen
List of businesses set to reopen this week in Texas
Show More
Church could be evicted for helping feed families in need
DWI numbers rising quickly as Houston reopens
Dog learns new trick during COVID-19 that gives back to community
Here's when a round of storms could impact us Wednesday
Commercial space companies looking forward to SpaceX launch
More TOP STORIES News