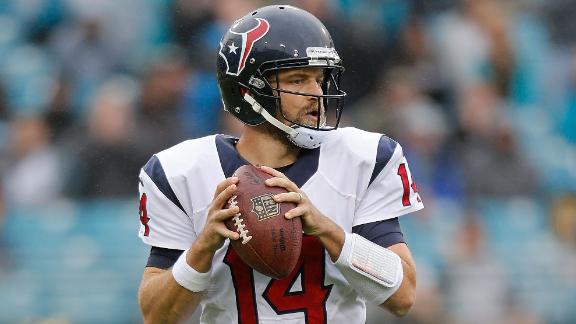 The offensively challenged New York Jets made their second trade in less than a week, acquiring well-traveled quarterback Ryan Fitzpatrickon Wednesday from the Houston Texans, the Jets confirmed.

The Texans will get a conditional seventh-round pick that can become a sixth based on how much playing time Fitzpatrick gets with the Jets, a league source told ESPN NFL Insider Adam Schefter.

It sets up another quarterback competition for the Jets, who went into free agency looking for a veteran to challenge the turnover-prone Geno Smith.

They upgraded the passing attack by trading for wide receiver Brandon Marshall to replace Percy Harvin, who subsequently was released.But quarterback remains a major question for the Jets, who ranked 31st in Total QBR over the last two seasons.

Fitzpatrick became expendable amid the Texans' recent flurry of quarterback activity. They re-signed Ryan Mallett and finalized a free-agent contract with Bryan Hoyer. Both quarterbacks began their careers with the New England Patriots, spending time under Texans coach Bill O'Brien.

The Texans signed Fitzpatrick to a two-year deal worth $7.25 million on March 21, 2014, the same day they traded quarterback Matt Schaub to the Oakland Raiders. The Jets will take on Fitzpatrick's base salary of $3.25 million for the 2015 season.

The Jets see it was a bargain price for an experienced quarterback, the reason they decided to make the trade instead of waiting until he got released.

Fitzpatrick, 32, will reunite with Jets offensive coordinator Chan Gailey, his coach for three seasons with the Buffalo Bills (2010-2012). Fitzpatrick enjoyed his three most prolific years in Gailey's spread attack, and the Jets like the idea of having an experienced quarterback well-versed in the system.

They had been targeting him since January. Maccagnan, too, is familiar with Fitzpatrick, as he worked in the Texans' scouting department until January.

The addition of Fitzpatrick won't preclude the Jets from draftingMarcus Mariota, if he slips to the sixth pick, but they don't appear to be leaning in that direction.

Fitzpatrick started 12 games for the Texans last season. After the first nine, during which he went 4-5, O'Brien benched him in favor of Mallett, who started two games, playing the second with a torn pectoral muscle. He needed surgery to repair the injury and was placed on injured reserve after that second game.

Fitzpatrick returned for three starts, setting a franchise record with six touchdown passes against the Tennessee Titans in his first of those three. In the third, he suffered a cleanly broken leg and could not finish the season.

Overall, Fitzpatrick threw for2,483 yards while completing 63.1 percent of his passes with 17 touchdowns and eight interceptions.

Texans Trade Fitzpatrick To Jets
Colin Cowherd reacts to the news that the Texans have traded QB Ryan Fitzpatrick to the New York Jets.