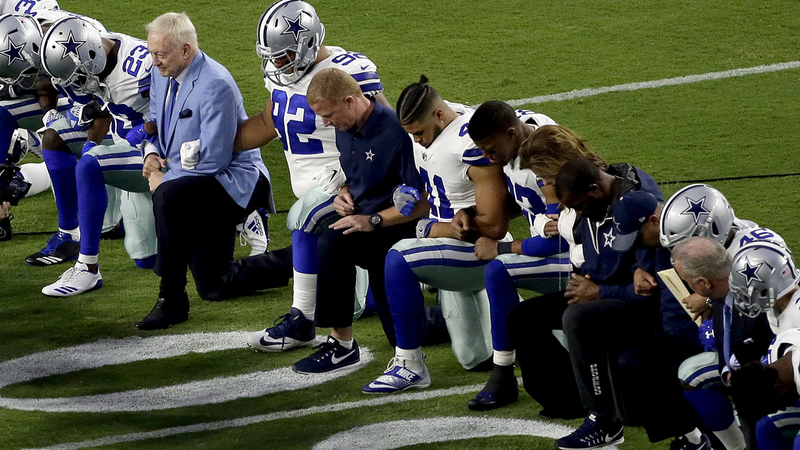 Jones then stood with the players and interlocked arms throughout the song.

The amount of protests around the NFL ballooned this weekend in the wake of President Donald Trump's criticism of players who protest during the national anthem. Only four players were observed kneeling or sitting last weekend, and two others raised their fists.

It is believed to be a protest to President Donald Trump's recent comments on protests during the anthem.

Trump on Friday night criticized NFL players who lodge protests during the national anthem.
Speaking at a political rally in Alabama, Trump said, "Wouldn't you love to see one of these NFL owners, when somebody disrespects our flag, to say, 'Get that son of a (explicit) off the field right now. Out. He's fired! He's fired!"

He has since tweeted several times on the issue.

Roger Goodell of NFL just put out a statement trying to justify the total disrespect certain players show to our country.Tell them to stand!

If NFL fans refuse to go to games until players stop disrespecting our Flag & Country, you will see change take place fast. Fire or suspend!

"American Idol" winner Jordin Sparks performed the anthem with Proverb 31:8-9 written on her hand: "Speak up for those who cannot speak for themselves, for the rights of all who are destitute. Speak up and judge fairly; defend the rights of the poor and needy."

Cowboys owner Jerry Jones said in August he wasn't a fan of the anthem protests spreading.
"I just feel so strongly that the act of recognizing the flag is a salute to our country and all of the people that have sacrificed so that we can have the liberties we have," Jones said during his weekly radio appearance on KRLD-FM 105.3 on Aug. 22. "I feel very strongly that everyone should save that moment for the recognition of the flag in a positive way, so I like the way the Cowboys do it."

The Cowboys tweeted a picture with the hashtag #FootballIsFamily.

Jones was one of seven NFL owners to donate to Trump's inauguration.