Jeremy Hill: Browns 'not that good' 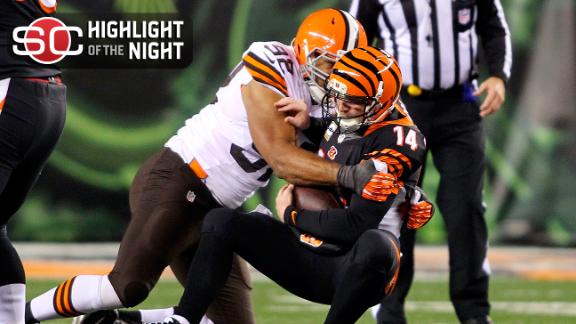 CINCINNATI -- The Cleveland Browns impressed many who watched their 24-3 dismantling of the Cincinnati Bengals on Thursday night.

Bengals rookie running back Jeremy Hill, who had a front-row seat for the blowout, was among the unimpressed.

Asked whether the Browns were better than he previously thought, Hill said, "Oh no, not at all. They're probably worse than I thought, to be honest with you."

He didn't stop there.

"They didn't do anything special to me," Hill continued. "I mean, respect to them, they won the game. But that's all I'll give them."

The Browns held the Bengals to fewer than 200 yards of total offense. Four days after Hill rushed for 154 yards and two touchdowns in a win over the Jacksonville Jaguars, Cleveland held him to just 55 yards on 12 carries Thursday.

"That's a rookie. You can't take his word for anything other than ignorance, being a sore loser," Browns safety Donte Whitner said Friday.

Just after the Bengals turned the ball over for a third time in the loss, Hill's frustrations boiled over. As he walked over to the sideline following the fourth-quarter interception, he threw his helmet some 10 yards into the sideline in disgust. He walked to the bench helmetless and sat as injured teammate Rey Maualuga grabbed the helmet and put it on the bench behind Hill. Along with Maualuga, fellow running back Rex Burkhead tapped the rookie on the shoulder as a form of encouragement.

Asked about those specific frustrations he showed, Hill let out a sigh before deciding to lay into the Browns once again.

"Those guys, they're not that good," he said. "It was on us [Thursday]. We gave them the game, in my opinion. They didn't do anything special. We just gave them the game. They just sat back with coverage the whole day."

Whatever the Browns did clearly worked. Cincinnati quarterback Andy Dalton had the worst game of his career, and the Bengals scuffled through their second game without a touchdown in a month.

The Bengals and Browns play in Cleveland on Dec. 14.

Browns Win Battle Of Ohio
Highlight Of The Night: The Browns moved into a tie of first place in the AFC North with a 24-3 win over the Bengals.