Jay Gruden: Redskins did everything 'by the book' with RG III 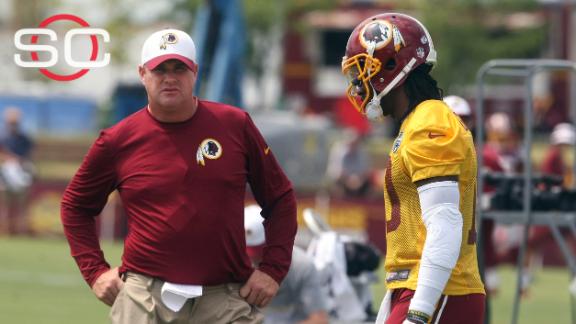 BALTIMORE -- Washington Redskins coach Jay Gruden said he was left like everyone else -- scratching his head over how quarterback Robert Griffin III went from being cleared one day to out the next with lingering symptoms of an apparent concussion.

Gruden also defended the Redskins' role in the situation.

An independent neurologist told the Redskins on Thursday that Griffin would be cleared to play against the Baltimore Ravens on Saturday night. But after further examining the data and consulting with the neuropsychologist, the neurologist reversed his decision Friday. That left Griffin sidelined for Washington's 31-13 win over Baltimore.

Griffin now must be re-evaluated later in the week.

This past week, Griffin declined to even say if he had a concussion. He did have two earlier in his career, one as a rookie in the NFL and one in college. Until Griffin goes through the tests later this week, Gruden said no decision will be made on which quarterback will start the season opener against the Miami Dolphins.

Gruden, though, says he not going to announce his starter yet.

"We have to re-evaluate the tape. We have to find out how Robert is," Gruden said after the game. "[Griffin] has to go through the protocol and get retested. We'll see how he's doing then and make our decision.

"I'm not going to announce anything [tonight], and there is no controversy."

There was confusion over Griffin's situation.

Though he didn't play Saturday, he did go through a hard workout in warm-ups, taking snaps and throwing passes for at least an hour. Gruden said the independent neurologist told the Redskins that Griffin had been cleared. During Friday's walk-through, Redskins doctors received the report, which stated that Griffin was not cleared.

"We're all as confused as you are," Gruden said. "People have to understand this has nothing to do with the Washington Redskins. I know people want to make it out that we're incompetent, but this had nothing to do with us. It was totally an independent doctor. A verbal [report] being said to our doctor, and then, all of a sudden, the written report is different. We followed proper course and did what we thought was right for Robert and what the report said. We followed everything by the book ... This was all put on us at the last minute."

Griffin participated in all four practices and the walk-through leading into Saturday's game. Because the practices were considered noncontact, Griffin was OK to take part.

"We did everything by the book," Gruden said. "He was cleared for noncontact activity, so we didn't put him in harm's way in any way, shape or form. He felt OK at the time, and we still wanted to make sure we went through the necessary steps."