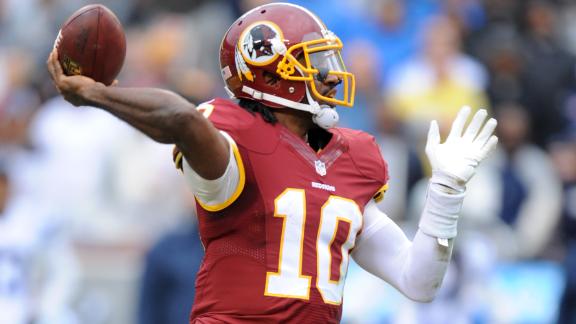 The quarterback competition that Washington Redskins coach Jay Gruden discussed after the season apparently has ended. Gruden told reporters at the NFL scouting combine Wednesday that Robert Griffin IIIwill enter next season as the starter.

Griffin, entering his fourth season, ended the season as the starter thanks to an injury to Colt McCoy.

"We'll go into the season with Robert as our No. 1 guy," Gruden said. "It's up to Robert to continue to grow and mature as a quarterback and as a person. Moving forward we want to see improvement. It's up to us as a staff to get more out of him."

It's not a surprise, given the investment made in Griffin three years ago. But it was surprising after what Gruden had said after last season ended.

After the Redskins finished a 4-12 season, one that saw Griffin benched for his performance, Gruden said of his quarterbacks, "I'd like to pick one as soon as I could so we could try to work and grind on him and develop him. But until that position is earned, you have to have a competition. I anticipate us having a competition at a lot of spots, and quarterback is no different next year."

The only other quarterback on the roster under contract for 2015 is Kirk Cousins. He took over last year when Griffin injured his ankle in Week 2. Cousins threw 10 touchdowns and nine interceptions, but five of those picks occurred in the fourth quarter, and all but one came in the second half. That led to his being benched for McCoy; Cousins never played again. McCoy is a free agent who might return.

There were reports during the season that the decision to return Griffin to the lineup came from above Gruden. But Gruden denied those charges. However, it wouldn't be the first time there was a disagreement over Griffin between a Redskins coach and owner Dan Snyder.

Former coach Mike Shanahan said on ESPN980 Wednesday that Griffin had told him things that Snyder also had discussed with the coach. It concerned him.

"When I went over and talked to Dan over at his house after I talked to Robert [after Griffin's rookie year], I just told Dan, 'Hey Dan, I just had a conversation with Robert and I think this conversation is coming from you more so than it is Robert,'" Shanahan said. "I said, 'If that's the case, there's no way, unless your owner, your GM, your head coach and your quarterback are all on the same page you win in the National Football League.'"

In nine games, Griffin completed 68.7 percent of his passes for 1,694 yards, four touchdowns and six interceptions for a passer rating of 86.9. In his last two starts, Griffin was a combined 43-of-64 passing for 556 yards but only one touchdown and three interceptions. He was sacked 29 times in his last seven games thanks in part to an offensive line that needs improving but also owing to a tendency to hold the ball too long.

Griffin's first season with Gruden was greeted with more rumors and negative stories, including one that started with a harsh assessment of his performance by the head coach. To help Griffin and the quarterbacks in general, the Redskins hired longtime quarterbacks coach Matt Cavanaugh.

Last year, Gruden and offensive coordinator Sean McVay handled the quarterbacks. But Gruden, a former college quarterback, said other demands prevented him from spending enough time with the position.

"To have another element working with Robert is a good thing," Gruden said.

Griffin also will spend time in the offseason with quarterbacks guru Terry Shea, as he did before the 2012 draft and again last offseason. The coaches can't work with Griffin until workouts begin in late April.

"Robert is a hard worker," Gruden said. "He works hard on his body and his strength, but we will have things drawn up for him, specific things that he can do to get better from the quarterback position mechanics-wise, throwing-wise, drop-wise. He has a good idea of what we did in OTAs and during the season with footwork and fundamentals that he'll continue to build on. Hiring Cavanaugh will only help in that process."

Gruden: RG III The Starter In Washington
Redskins coach Jay Gruden says the team will go into the season with Robert Griffin III as the starting quarterback.