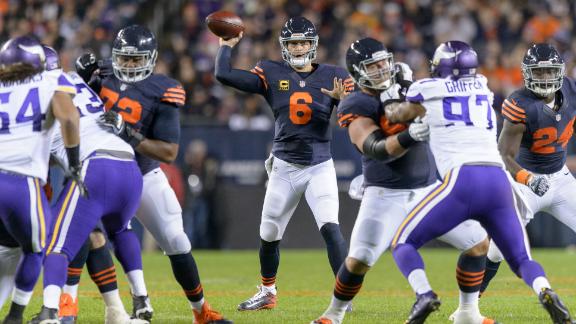 CHICAGO -- People have questioned Jay Cutler's leadership from virtually the moment he arrived in town.

But Cutler, 33, played a large role in a 20-10 victory over theMinnesota Vikingsin more ways than one Monday night.

Chicago Bearsreceiver Alshon Jeffery revealed that Cutler delivered a pregame speech to the entire team that resonated throughout the locker room.

"He was talking about giving relentless effort," Jeffery said. "He said to give it everything you got and play for each other."

Cutler said he meant for the speech to be inspirational. The Bears had lost three straight heading into their prime-time matchup with Minnesota and wanted to avoid falling to 1-7.

"It was about inspiration," Cutler said. "Everyone in there is from different backgrounds, different cultures, societies, family lives and schools. Whatever it takes to find that inspiration because motivation usually wears off at some point during the game. Those guys played inspired football, so it was fun to be a part of."

Cutler said he draws personal inspiration from a lot of outside sources, including his wife and children.

"Well, it's very personal," Cutler said. "It's been 11 years of [his playing in the NFL] and to be part of a locker room like that and get the game ball like that, it was fun."

In his first game back after being sidelined five weeks with a thumb injury, Cutler went 20-of-31 for 252 yards and one touchdown (100.5 quarterback rating). The offense, which had struggled to reach the end zone in recent weeks, scored a pair of touchdowns with Cutler at the helm.

Whether he quieted fans who thought the Bears were better off with Brian Hoyer is another issue. But that became a moot point when Hoyer broke his left arm last week in a Thursday night loss at Green Bay.

"I was so happy [to have Cutler back]," tight end Zach Miller said. "He's the emotion on the football field. To have him back means a lot. We play well around him. Everybody played well. It was just good to get a win."

It's all about execution for Cutler
Bears quarterback Jay Cutler says the team's 20-10 win on Monday Night Football comes down to a good game plan and solid execution.