James leads yet another team to a first-round sweep 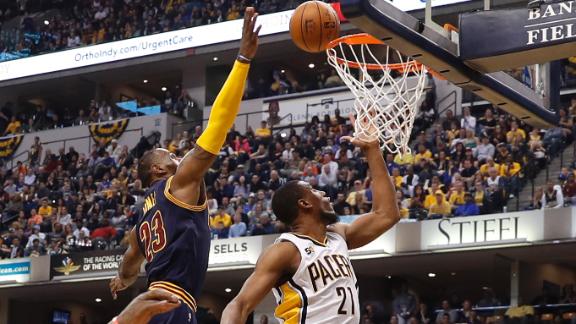 INDIANAPOLIS -- It could have been any conversation between any mother and son leaving a crowded live sporting event.

The mother wanted to walk back to the hotel alone. It wasn't too far from the arena, she reasoned. The son didn't think it was a good idea. The mother countered by saying she could just hail a cab. The son said that with the game getting out, traffic would be congested and why not walk because it will be faster, just walk with someone. The son suggested a business associate accompany the mother, and the problem was solved.

A perfectly normal conversation between LeBron and Gloria James after the Cleveland Cavaliers superstar turned in another playoff performance in sweeping the Indiana Pacers that is making his masterpieces seem mundane.

James won his 21st straight first-round playoff game with Sunday's 106-102 victory over the Pacers -- the most ever consecutive wins by any player in that round since the league expanded to a 16-team postseason format in 1984 (a trio of "Showtime" Lakers won 20 straight while James did it with two franchises). James did it by playing 45 minutes out of a possible 48, leading all scorers with 33 points, collecting 10 rebounds, four assists, four steals and two blocks (one where his momentum took him off the court and running through the player tunnel doing his "Forrest Gump thing") and nailing a go-ahead 3-pointer with 1 minute, 8 seconds remaining in the fourth quarter to give Cleveland the lead for good.

Does James even remember his last loss in the first round? Way back five years ago, before James dismissed Indiana in 2017, Detroit in 2016, Boston in 2015, Charlotte in 2014 and Milwaukee in 2013 without allowing any of those cities to experience the feeling of even a lone playoff win?

He was told the answer: Game 4 of the Miami Heat's first round series with the New York Knicks on May 6, 2012, when his team lost by two back when J.R. Smith and Iman Shumpert were opponents instead of teammates.

"J.R. had a nice move that game, by the way," James said, his memory jogged. "Windmill dunk on the baseline. We won that [series] in five, right? Appreciate it."

Appreciation is hard to come by for what James and the Cavs are in the midst of. Even though they blanked a Pacers team led by an elite player in his prime in Paul George (28 points, 8.8 rebounds and 7.3 assists per game in the series), there were just as many stats getting play on Sunday poking holes in what Cleveland did as a team than there were giving credence to James' accomplishments.

The 16 combined points the Cavs won by were tied with the 1975 Golden State team that swept Washington in the Finals as the smallest margin of victory in a four-game sweep ever. The 100-plus points the Cavs allowed in each game made them the first team since the 1995 Houston Rockets to allow the century mark in all four wins of a sweep. The 111 points allowed to the Pacers per 100 possessions was more than 12 points worse than what the average NBA Finals team fared when it played in the first round, according to ESPN Stats & Information research. All of this is evidence, supposedly, that there's nothing to be excited about for this start to the postseason for the defending champs.

That's not what Cavs coach Tyronn Lue was focused on, however.

"Defensively, I thought we took a step forward," Lue said. "And that's all I wanted to see. I know we can score the basketball. Getting the stops is most important. All these games came down to the wire and when we needed to get stops, we got stops."

Smith admitted that a first-round sweep by the Cavs for the third consecutive year left him with a "dwindling" reaction. "We just expect more," he added.

It's the same mental math Cleveland would play during the regular season, frustrating onlookers that saw an underwhelming group. "It's hard to get up for teams that are not playing for anything," Deron Williams said of the Cavs regular-season disappointments down the stretch. "But now everybody is locked in and it's a whole different feeling."

The first round engaged this Cavs team in a way the regular season simply couldn't. And the second round -- whether it be against Milwaukee or Toronto -- promises to ratchet their attention level up yet again.

And while James' 3-4 record in the NBA Finals will be talked about far more than any other facet of his postseason career, those trips to the championship round all had to start somewhere.

He finished with first-round averages of 32.8 points, 9.8 rebounds and 9.0 assists -- narrowly missing becoming just the third player in the last 30 years to average a triple-double in a best-of-seven series -- while shooting 54.3 percent from the field and 45.0 percent from 3. He added three steals and two blocks per game to boot.

James accomplished the 10th sweep of his postseason career, besting Tim Duncan's nine for the most all time. He improved his first round series record to 12-0 as his averages in the opening round improved to 29 points, 8.8 rebounds and 6.9 assists per game.

And he made it all seem normal.

"Competition is very hard," James said, asked to explain how he does it. "Mentally challenge yourself every year to go out and try to do what's right. Put your body on the line. Put your team on the line to try to be successful is very hard.

"I go out every night to try and win a ball game. Do whatever it takes to help my teammates be successful and do whatever it takes to help me be successful. That's been the result of it. I'm truly blessed and honored to be in a position where I hold a record in this league that's had so many great players and so many great teams throughout the years in the postseason. I just want to continue to play the game the right way. If I do that, I give myself, my teammates and different guys and all the kids looking up to me for inspiration, it gives them hope. And that's all that matters to me."