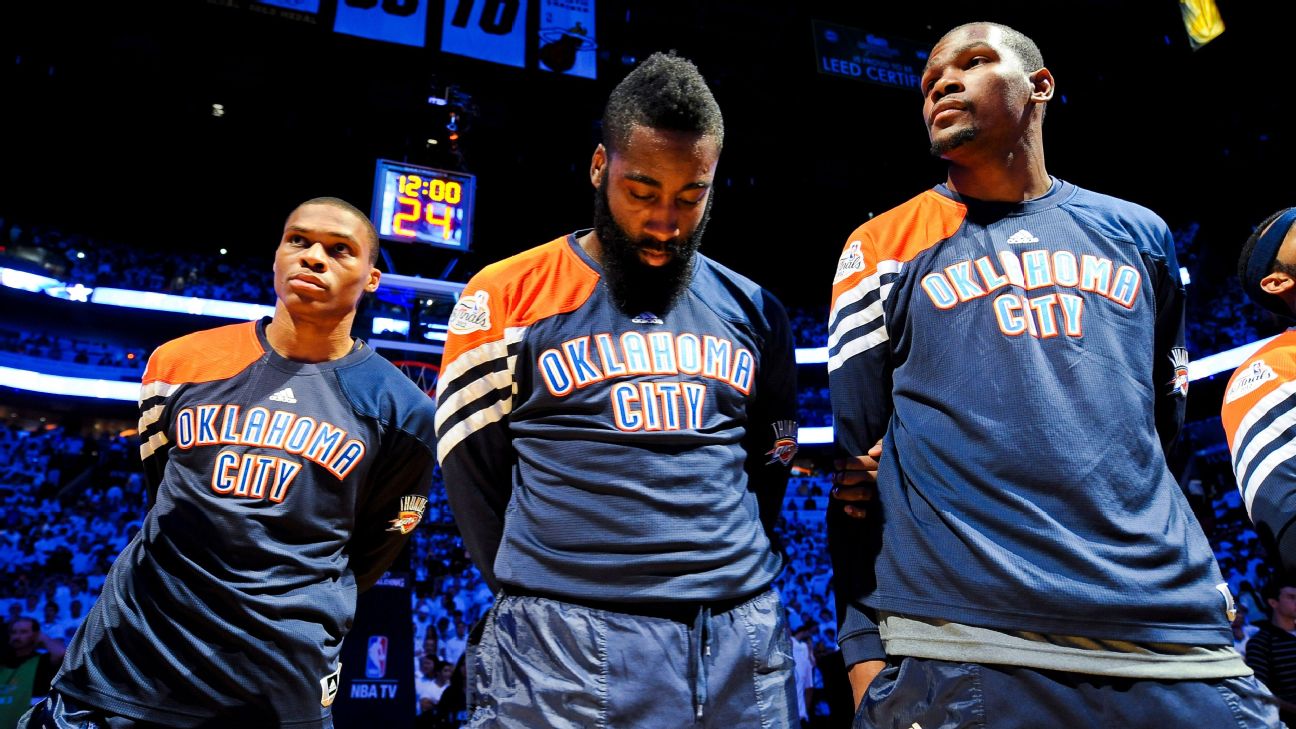 It happened in the span of about 70 seconds.

It was Game 3 of the 2010 Western Conference first round, and a bunch of early 20-somethings were toe-to-toe with the eventual champion Los Angeles Lakers. It was the moment the Oklahoma City Thunder truly arrived.

The iconic third-quarter 8-0 run and eventual comeback win against the Lakers is now a piece of Thunder lore, showcasing a bit of each player's personality and skill -- a ferocious Russell Westbrook poster, a smooth James Harden 3-pointer off the catch and a now-famous dagger Kevin Durant pull-up jumper -- a moment placed in a time capsule to remember simpler times.

It was the first-ever postseason game in Oklahoma City, a chaotic energy in the arena translating into tension on the court, with the game becoming more of a civic awakening than a competition. It was an inexperienced team playing a playoff institution, a small-market duckling sending a message to one of the mightiest of the mighty big markets.

There was a purity and innocence to it all, with all three young stars oblivious to what was eventually ahead.

Two years later that moment segued into another enduring image, with the Thunder's three stars standing on the sideline together in Miami as the Heat eliminated them in a five-game NBA Finals. Harden was in the middle, an arm around Durant and Westbrook each, watching the seconds tick away as LeBron James celebrated his first title. The trio never played another game together.

Harden was traded before the beginning of the next season and Durant left through free agency in 2016 -- and now they each stand apart, their arms around their own franchises, with Harden joining Durant and Westbrook as MVP winners.

The original OKC big three exist only in the NBA afterlife, tucked away in the great vault of what-ifs, all realizing their full individual potential while disconnected from the others.

It's fitting, in some ways, that Harden was the last of the old OKC trio to win MVP. He was always the Thunder's third option, the star who had to sacrifice to serve as a sixth man, the one management wasn't willing to give a maximum contract to keep.

Even as Harden accepts the league's premier individual honor -- a year after his second runner-up finish, when Westbrook won and the Houston Rockets felt Harden was robbed -- The Beard is overshadowed by a former teammate. Durant sits atop the NBA world weeks after claiming his second consecutive Finals MVP trophy and championship with the Golden State Warriors.

Gripping those two trophies are the only moments missing from Harden's resume as an NBA legend now. And that makes his first MVP campaign somewhat bittersweet.

"This is our year," Harden told ESPN's Shelley Smith midway through the season, firmly believing that the Rockets would dethrone the Warriors dynasty during the playoffs.

That came so painfully close to happening. The Rockets had the Warriors on the ropes in the Western Conference finals -- even after Chris Paul, the co-star Harden recruited to Houston, suffered a series-ending hamstring strain in the final minute of a Game 5 victory that put Golden State on the brink of elimination.

The Rockets still managed to take double-digit halftime leads over the Warriors in the next two games. They ended up with the dubious distinction of becoming the first team to blow such leads in elimination games twice in the same playoff series, according to Elias Sports Bureau research.

"Two games, Games 6 and 7, one half of basketball," Harden said after the Game 7 home loss, when the Rockets missed an NBA playoff-record 27 consecutive 3-point attempts.

"We just didn't have the same energy that we had in that first half, or the pace. So it's extremely frustrating."

Harden has spent twice as many seasons in Houston as he did in OKC, but he'll never break his connection with the team that drafted him. And there's some beautiful narrative poetry that he hoisted the Maurice Podoloff Trophy exactly nine years to the day after the Thunder took him third overall.

The Thunder organization moved on quickly from the trade, with context getting shouted down by narrative. The Thunder won 60 games the season after trading Harden with the league's top margin of victory (even eliminating Harden and the Rockets in the first round) but had their season effectively ended when Patrick Beverley ran into Westbrook's knee.

They went to the Western Conference finals two more times -- losing to the San Antonio Spurs in six games, then the Warriors in seven after taking a 3-1 lead -- before Durant left in free agency.

And with Paul George's future hanging in the wobbly balance of free agency, the Thunder may be as far away as ever.

The Thunder have positioned themselves to at least have a chance at George, something that would've been a pipe dream a year ago. The Thunder have gone from not even on the meeting list to sitting in pole position with a real opportunity to keep him, at least for another season.

The organization has spent a year recruiting him, from the time he stepped off the plane and ushered to a welcome party, to a few team staffers -- including Donovan -- being invited by George's family to Southern California to join a surprise birthday party for George last week.

There really hasn't been a team to experience three consecutive seismic summers like the Thunder, from Durant leaving, to the uncertainty around Westbrook, to George's pending decision. And with Harden taking his own MVP, and Durant winning a second straight title and accompanying Finals MVP, you wouldn't blame the Thunder for being trapped in the void of hindsight. But that has never been the Thunder's approach.

As it has always been, it's on to the next.

The hope in Houston is that last season wasn't the Rockets' best shot at dethroning the Warriors dynasty, just their first.

The price tag to keep the Rockets' core together will skyrocket this summer with Paul commanding a max deal and blossoming star big man Clint Capela and a few key role players entering restricted free agency, but new owner Tilman Fertitta has repeatedly stated that he's fine with paying a hefty luxury-tax bill if Houston has a contender.

General manager Daryl Morey will turn over every stone to try to add another superstar. ("We have new math," he half-joked when asked how the Rockets could make that work with the salary cap.) However, it's much more likely that the Rockets' roster next season will closely resemble the team that won an NBA-best 65 games in 2017-18.

Harden finally has his MVP, but he's still seeking the satisfaction that can only come with riding on a float during a championship parade. He's still gunning for Golden State and his old friend Durant, as the Thunder and Westbrook attempt to work their way back into contention.

"I think we're very close, obviously," Rockets coach Mike D'Antoni said. "Some things we'll tweak, and we'll get back on the horse and we'll get these guys here pretty soon."

Arguably the most talented trio to ever play together in the NBA has separated, scattered throughout the Western Conference. Westbrook and Harden have joined Durant in the MVP club the past two seasons, while Durant has celebrated championships, the ultimate goal that has thus far eluded his old Oklahoma City running mates. 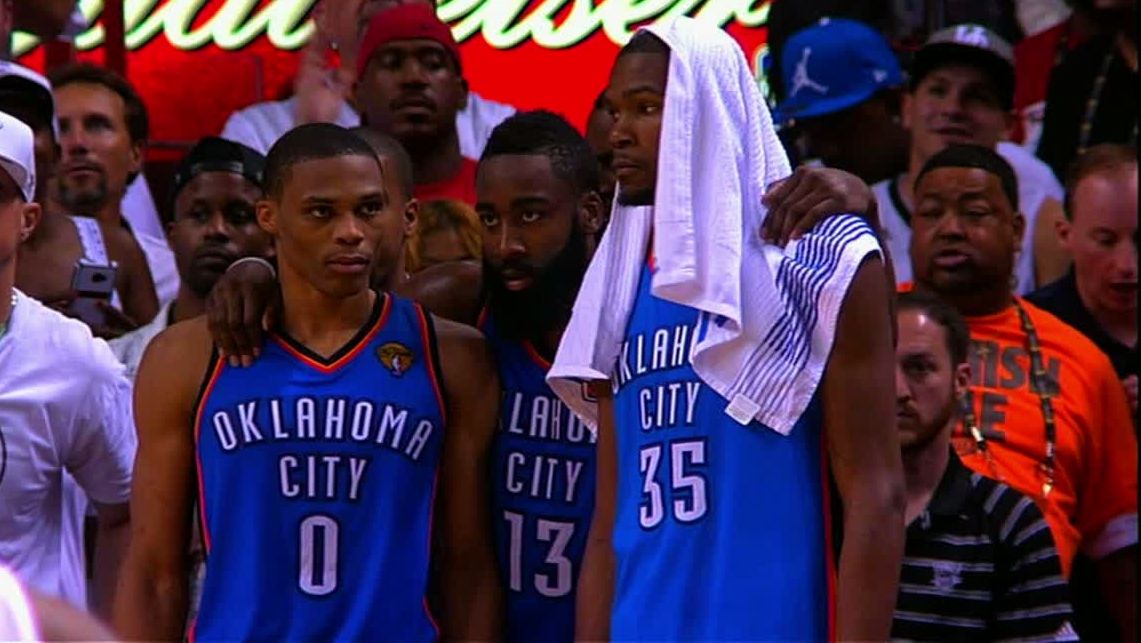