James Harden: 'We don't really worry about who we're playing' 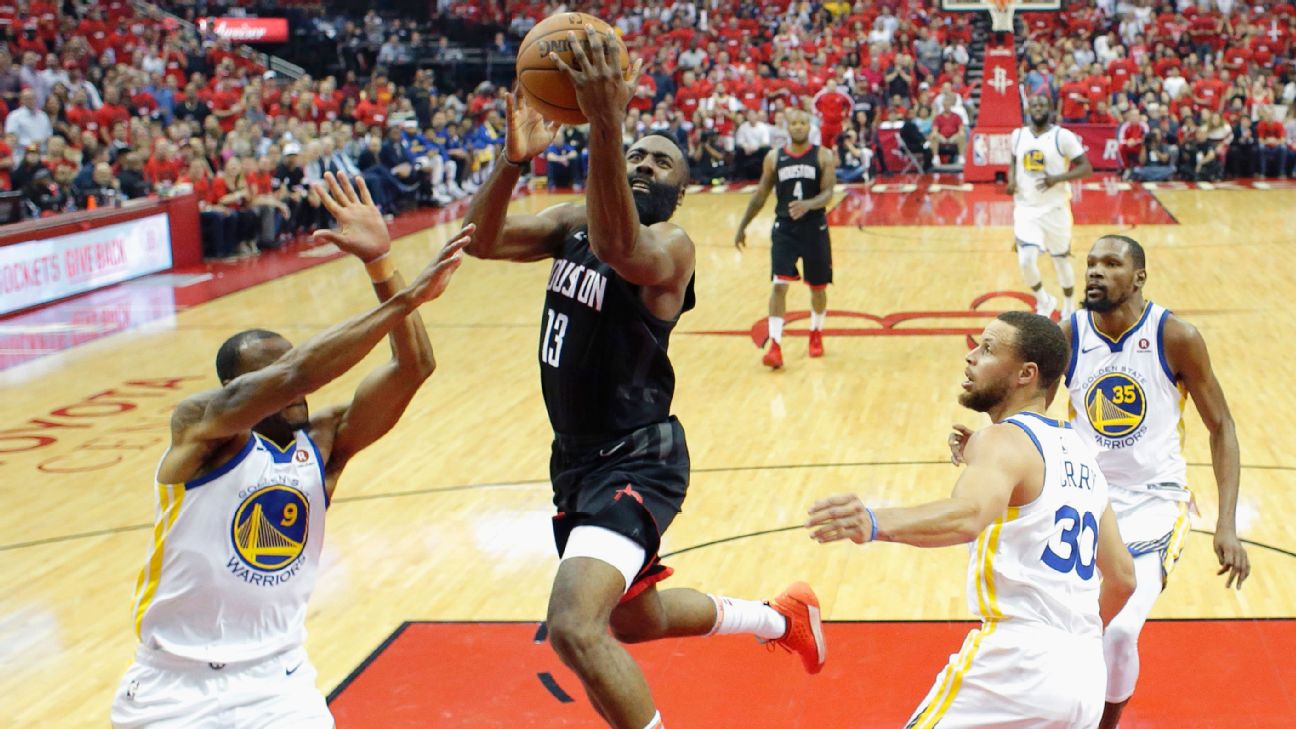 HOUSTON -- With all due respect to the defending champion Warriors, James Harden isn't concerned about the Rockets' opponent in the Western Conference finals.

"We focus on what we're supposed to do," Harden said after the Rockets evened the series with a 127-105 win in Game 2 on Wednesday night. "We don't really worry about who we're playing against. Like, if we come out and be some dogs and do what we did tonight, it doesn't matter. But if we don't, then we see the results in Game 1. It's not about chess match or what they're doing. It's about us."

Rockets forward PJ Tucker, who starred in Game 2 with a playoff career-high 22 points on 8-of-9 shooting, shares Harden's confidence that Houston can win this series. But Tucker believes the Rockets, the team with the NBA's best record at 65-17 this season, must embrace being the underdogs to end the Warriors' three-year reign as West champions.

Houston's improved intensity -- "more force," as coach Mike D'Antoni put it -- was consistently pointed to by the Rockets as the primary difference in Game 2.

"If the first game we were at a 70, tonight we were at a 95," Harden said. "We were pretty aggressive defensively, and that allowed us to get out in transition. If we be comfortable, sit back and just allow them to get to their spots and run around freely, then they're going to pick us apart. But if we get into them and try to make it tougher on them, good things will happen for us."

The Rockets had a much more balanced scoring attack in Game 2 than they did in the series opener Monday, when Harden tallied 41 points in a 119-106 home loss. Harden had 27 points on 9-of-24 shooting in Game 2, and a few Rockets role players were very productive: Sixth man Eric Gordon (27 points), small forward Trevor Ariza (19 points) and Tucker all had their highest-scoring outings of this postseason.

"Everything was fueled off our defense," said Gordon, who was 8-of-15 from the floor and 6-of-9 from 3-point range.

The Rockets, who cleaned up the mental mistakes that allowed the Warriors to often get wide-open looks in Game 1, were determined to play at a faster tempo. They succeeded because they were able to get more defensive stops, including forcing 15 turnovers. The Rockets had 12 fast-break points -- four times as many as in Game 1 -- and were able to generate a lot of offense early in their possessions, after having to grind out possessions in the opener.

"Then offense is easy," Tucker said. "We don't have to think about it. We don't have to talk about offense. We have two of the best playmakers in NBA history probably and Eric Gordon, guys who can attack the rim and really shoot the ball. When we get stops on defense, we can get whatever we want on offense."

The Rockets were especially dominant defensively in the first quarter, when they held the Warriors to 21 points. Golden State had almost as many turnovers (seven) as made field goals (nine) and did not register a 3-point shot in the quarter.

"From the start, we were more aggressive, instead of allowing them to attack us first and us react," said Ariza, who was 7-of-9 from the floor and had six assists. "I think we reacted first and brought the fight to them, rather than them hitting us first."

Much of the media focus after Game 1 was on the Rockets' isolation-heavy offense, which didn't change in Game 2, other than Houston pushing the tempo more. According to Second Spectrum data, the Rockets ran 46 isolations in Game 2, one more than they ran in the series opener.

The focus for the Rockets' coaches and players between games was on playing harder and smarter on defense, which they consider the key to giving themselves a chance to beat the Warriors.

"We know who we are," Tucker said. "We don't need to win a game to know who we are. We watched film, and nobody had anything to say. We understand. We get that. For us, it's just playing how we play. We didn't play Rocket basketball in Game 1. We all know that. We saw it. We watched the clips.

"Our guys have pride. We knew that what we did that first game, we can't do that again. Regardless of the outcome, we're not going to play like that again."