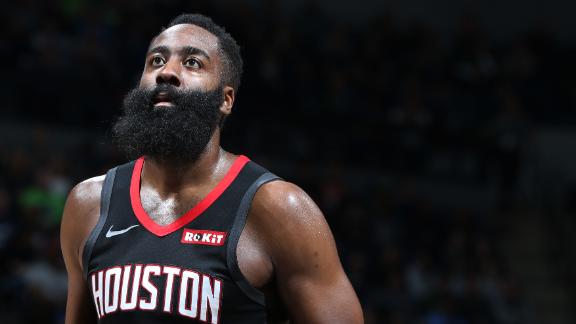 ESPN
MINNEAPOLIS -- Undermanned and playing for the second consecutive night, the Houston Rockets still had plenty of reason to be confident.

"I would think it would give you confidence," coach Mike D'Antoni said. "You're playing with a bazooka out there."

Harden unloaded Saturday night, scoring 49 points on a whopping 41 shots from the field to lead the short-handed Rockets to their seventh straight victory, 125-105 over the Minnesota Timberwolves.

With Russell Westbrook resting and several key contributors injured, the Rockets needed Harden to shoulder an even bigger scoring load than usual. The 41 attempts are the most in his career, and the most in the NBA this season, surpassing the 37 Golden State's D'Angelo Russell took in an overtime loss Nov. 8 in the same building in Minnesota.

"It was a collective effort," Harden said. "We've got six, seven guys out. So it could have been an easy game, where we just chalked it up and got ready for next game. We wanted to come here and win this game, and we showed it."

"He scored [49] on 41 shots," Timberwolves forward Robert Covington said. "That's what we want. But it's just the other guys hurt us. We followed the game plan with him."

Ben McLemore scored 20 points. Undrafted rookie Chris Clemons scored a career-high 19 off the bench for the Rockets, who broke open the game with a 9-0 run in the fourth quarter. Austin Rivers also scored 19 points.

In addition to Westbrook, the Rockets were without center Clint Capela, guards Eric Gordon and Gerald Greenand forward Danuel House Jr. And they were playing the second game of a back-to-back following Friday night's win over Indiana in Houston.

"There was a lot of heart," D'Antoni said. "I think that's what we're more excited about, just the heart and the effort and what went into playing a back-to-back. That's a character win."

Karl-Anthony Towns had 27 points and 15 rebounds for the Timberwolves, who also were short-handed. Andrew Wiggins missed his second consecutive game for personal reasons.

Jake Layman made his first start of the season for Minnesota and scored a season-high 21 points. Covington had 17 points.

"I'm a no-excuse person," Timberwolves coach Ryan Saunders said. "Who's on the court is on the court. But we have to do more things to make teams like that uncomfortable. James Harden is a heck of a player. He's one of the best scorers you'll ever see. And he took 41 shots. I thought we made him work for some of them. But some of them, we didn't."

Harden scored 18 of his 30 first-half points in the first quarter. It was his highest-scoring first quarter of the season. Harden took 17 of his team's first 25 shots. He and the Rockets led by two at halftime despite trailing by as many as 11.

"We can't take any game for granted," Harden said. "We showed that tonight. I think the first half we gave up too many points. Second half we locked back in. They barely got over 100 points. That's pretty much the goal every single game. Guys didn't look around. We manned up and got a win."

Rockets: Isaiah Hartenstein had a career-high 16 rebounds. The Rockets have held a double figure lead in 12 of 13 games this season. Nene also missed the game with a left adductor strain.

Timberwolves: Guard Josh Okogie did not play because of left knee soreness. Guard Shabazz Napier (right hamstring strain) remained out. First-round pick Jarrett Culver scored 13 points off the bench. The most points scored by a Minnesota opponent is 55 by San Antonio's Tony Parker in a double-overtime game on Nov. 5, 2008.

Clemons has played in seven of the 12 games this season. But he's used to scoring in bunches. He led the nation in scoring at 30.1 points per game as a senior at Campbell. He finished his career with the third-most points in NCAA Division I history. Saturday, the Rockets were plus-32 with Clemons on the court.

"He knows what he does, and he's very confident," D'Antoni said. "We know he can shoot and all that, but his defense is good and he works hard. It was good. He's earned it."

Timberwolves: At Utah on Monday night.