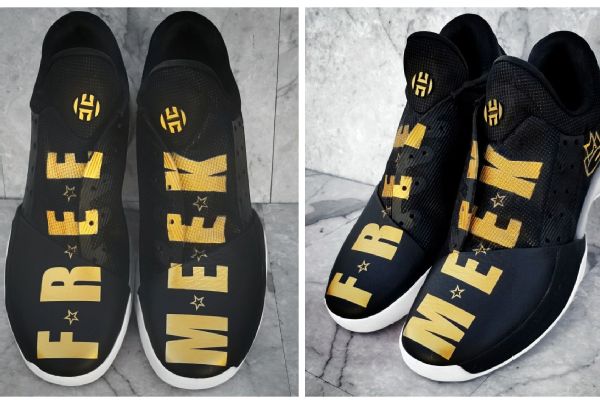 When he takes the floor Thursday night to face theBoston Celtics, Houston RocketsAll-StarJames Harden plans to don a special message across his sneakers for the first time this season.

After a repeat probation violation, the Philadelphia native and longtime musician is facing two to four years of prison time at a nearby Chester, Pennsylvania, facility.

As Meek Mill's music has become a staple during pregame layup lines at NBA arenas across the league, he and Harden have forged a friendship. Harden has had him perform at past birthday parties, and the two also took part in a charity basketball game earlier this summer.

The league's leading scorer flew to Pennsylvania to visit Mill in jail after the Rockets' loss Monday at Oklahoma City before heading to Boston to face the Celtics.

"His spirit is high and hopefully we can get him out by February," Harden wrote on Instagram. "Told me to tell y'all when he get out he got some [fire] for y'all."

The style of the gold accented design atop the black-based Harden Vol. 1 takes its inspiration from Pharrell Williams' popular line of "Human Race" Adidas sneakers, which often feature social messages of inclusion in bold letters down the middle of each shoe.

"Had to hit home with this pair to make a statement," Amezcua said.

Commissioned by Harden's close friend Troy Payne, who now works at Adidas, he and Amezcua began brainstorming the concept two weeks ago as a surprise gift for Harden during his trip East.

Judge Genece E. Brinkley cited a failed drug test and unapproved travel, stemming from a 2008 gun and drug case, as the violations of Mill's probation.Mills' attorney, Joe Tacopina, said Brinkley went against the recommendations of the district attorney and Mill's probation officer, who recommended "no incarceration for technical violations," and accused Brinkley of "taking an inappropriate personal interest in [Meek Mill] that goes above and beyond her role as a judge."