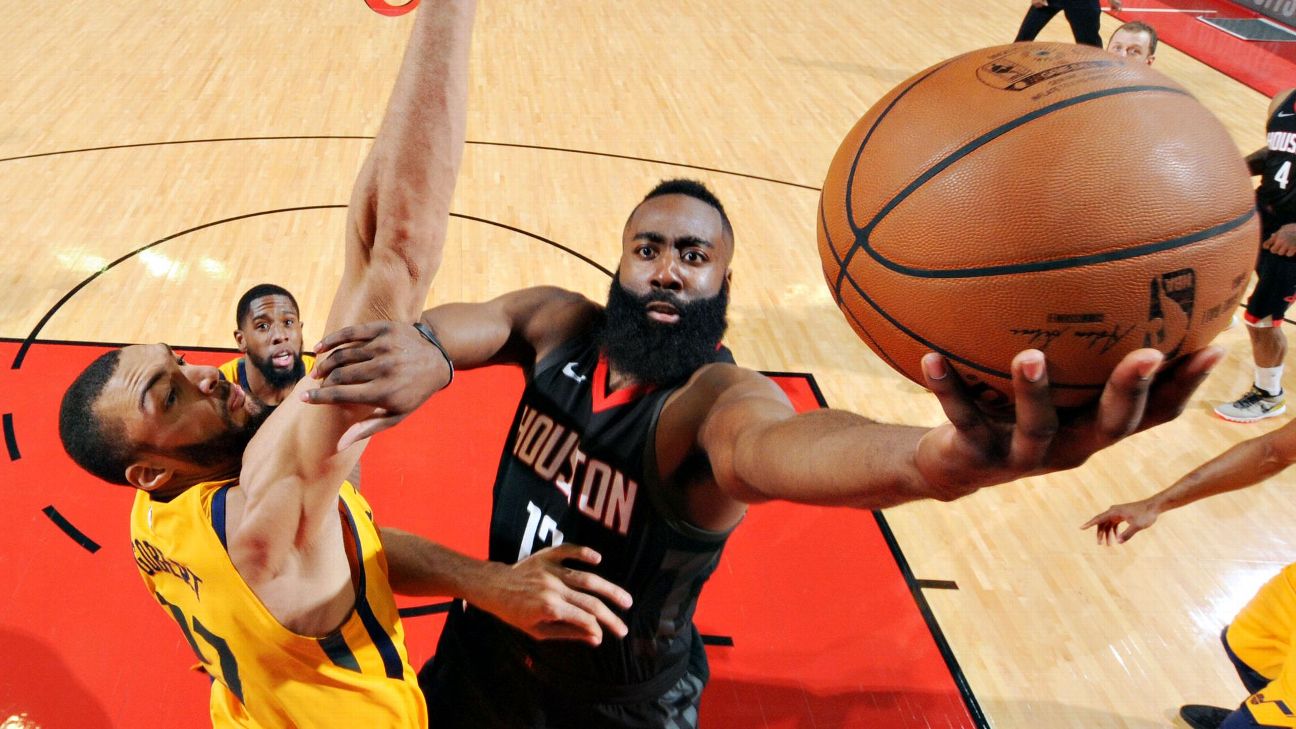 HOUSTON -- It was only about 36 hours ago that Donovan Mitchell sat with three Utah Jazz teammates at the podium following a grueling series win over the Oklahoma City Thunderand was asked about preparing for what was next.

Joe Ingles said they would enjoy their win "tonight," but Mitchell jumped in to correct him that it was past midnight -- it was already Saturday. And with a midafternoon tip Sunday some 1,500 miles away in Houston, against a rested and ready Rockets team, the Jazz found problems right away.

Houston scored 36 points in the first quarter -- James Harden and Chris Paul combined to match Utah's 21 on their own -- leading to a 110-96 Rockets win that wasn't even that close.

Harden finished with 41 points, 8 rebounds and 7 assists in a clinical performance, and the Rockets built a 25-point halftime lead in a devastatingly casual way, hitting 10-of-16 from 3 as they shredded one of the league's top defenses over the first 24 minutes.

Maybe there was a fatigue element for Utah; or maybe the Jazz were on the road playing a Game 1 against the NBA's best team this season.

"They had some dead legs," Rockets coach Mike D'Antoni said, "and we came out and did what we were supposed to do."

It was ruthless, almost mean in a way, the way the Rockets handled the Jazz. In the third quarter, Utah was finally building some momentum, getting stops and scoring in the paint to cut the deficit to a relatively manageable 15 heading into the fourth. Then Paul waltzed his way up the court and drilled a 3 at the buzzer to push it back to 18.

Jazz center Rudy Gobert dominated the series defensively against the Thunder with his deep paint protection, frustrating Russell Westbrook by keeping him indecisive about whether to attack all the way to the rim or stop from the elbows to pull up for a jumper.

But for Harden, at least in Game 1, it was a completely different story. Having the floor spread with elite shooters helps, but Harden has a weapon that Westbrook couldn't deploy -- the floater.

Harden didn't take many in the game, but the threat alone, and withClint Capelalurking on the baseline, often left Gobert flat-footed and conflicted, worrying about an alley-oop or Harden charging at him.

"It's just a totally different team," Gobert said. "They've both got superstars with different strengths, but we've got to adapt. We've got to watch the tape, communicate and get better. For me, it's totally different. It's a team that has a lot of shooters. They're maybe not as explosive at the rim, but they got Capela on the rolls and James Harden who's very smart, very good at finding him. We just got to keep getting better and adjust."

Combine that with Harden's signature step-back 3, and Gobert wasn't able to defend the same way he did against Westbrook. The Jazz could live with Westbrook pulling up for an off-the-dribble 3. Give Harden one and you're asking for trouble, and potentially a quick series.

"They're different players," Jazz coach Quin Snyder said of the adjustment between Westbrook and Harden. "Contrasting not just between those two players, but between those two teams. That's part of playing in a new series, and we'll need to make [the adjustment]. Sometimes players just sort of feel something. There's no way to simulate playing against Houston. You can talk about it, you can watch the video, you can refer to previous games, you can talk about their series against Minnesota, but until you get out there, it becomes more difficult to make the adjustments you need to make."

The Jazz threw a number of different looks at Harden, trying quickness in Mitchell, a positional match in Royce O'Nealeand size with Jae Crowder. They all tried to funnel Harden to Gobert, which is typical Jazz strategy, but with all the spacing and weaponry on the perimeter, it made for easy pickings.

"Offensively, this team, we are different," Harden said. "We've seen so many different defenses throughout the year that it prepared us for this moment. Whether its Gobert at the rim or switching or whatever, we've seen it all, all year. We watch film and figure out how we can create 3s and create opportunities for each other. We go out there and play our butt off. Pretty simple."

Mitchell had a few moments -- like an absolutely rotten crossover of Harden for a pull-up 3 -- but as the Rockets carved the Jazz up in the first half to build their 25-point lead, Mitchell went to the break with just nine points on 10 shots. It's a lot to ask of a rookie coming off a slugfest series to move on to play on the road against the best team in the NBA, but Mitchell clearly didn't have the kind of assertiveness that made him so eye-poppingly awesome in Round 1.

"He's got to stay aggressive," Snyder said of Mitchell before Game 1. "I've tried for him to define aggressiveness as passing aggressively, driving, shooting and really not getting hung up on, 'Am I playing the 1 or the 2?' Just be who you are."

The Jazz have to regroup, and there are plenty of adjustments to be made. They've got to make Gobert the influencer he was against the Thunder, and prod Mitchell to maintain his forcefulness. With two days between games, they have time to recover, and rework their thinking.

"We didn't have a lot of time to prepare," Mitchell said. "We wanted to be able to go through it, and the first half was kind of like our gotta-see-the-preparation half, and the second half we started moving the ball and looks started to get easier."

The Jazz arrived thinking about taking at least one of two games in Houston, and deep down may have known Game 1 was going to be a punt. They showed some impressive fight to cut into Houston's lead in the fourth quarter, but playing against the Rockets is an exhausting test of both physical and mental endurance and discipline.

The Jazz weren't ready for Game 1. But they shouldn't feel too bad; the Rockets do that to a lot of teams.

Harden powers Rockets to victory
James Harden delivers another stellar performance, his sixth career playoff game with 40 or more points as the Rockets roll to a Game 1 win.

Harden feeds Capela for poster dunk
James Harden drives and dishes to Clint Capela, who finishes with a dunk over Rudy Gobert.