James Harden on Chris Paul's All-Star snub: 'What are we rewarding?' 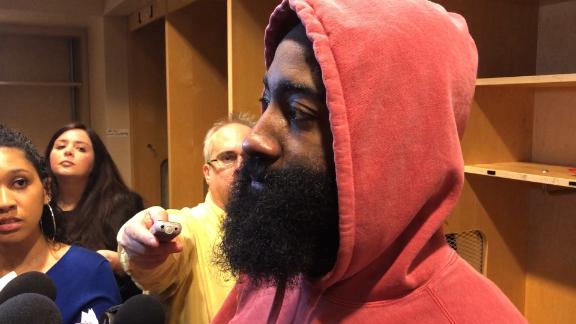 DALLAS -- Houston Rockets guard Chris Paul said he was "cool" with not being selected for the All-Star Game.

His co-star and coach weren't so accepting of the snub.

"I was amazed that people that should be watching games don't watch the games and see how important a guy is," Rockets coach Mike D'Antoni said. "He's for all the right things -- gave up space and personal accolades to make the team better. He did that and is still having one of his better years, a career year. It's perplexing."

The 34-12 Rockets were the only team among the top three in the standings of either conference that didn't have multiple players selected to the All-Star Game.

The Golden State Warriors, who have the league's best record at 38-10, had four players picked as All-Stars.

James Harden, the NBA's scoring leader, will be the Rockets' lone representative among the 24 All-Stars.

"Second-best overall record in the NBA, No. 2 in the best conference in the league, [Paul] averages -- what? -- 19 [points] and nine assists. I mean, what are we rewarding?" Harden said after Wednesday's 104-97 win over the Dallas Mavericks. "What are we rewarding? We're winning and he's putting up the numbers. It's no question.

"Obviously, we have a lot of depth on this team, but I'm not out here doing it by myself. He's controlling these games, as well. When I was out, you see the show he was putting on? You see what he's been doing the last couple of games? I don't know what we're rewarding now."

Paul had his streak of nine consecutive All-Star appearances snapped last year, his final season with the LA Clippers. He has missed 17 games due to injuries this season, a possible reason coaches opted not to vote him among the Western Conference's reserves, although D'Antoni dismissed that logic.

"He doesn't deserve to be in the All-Star Game?" D'Antoni said, noting the Rockets' record of 24-5 when Paul has played. "Give me a break."

Asked how much winning factored in All-Star selections, D'Antoni said, "Obviously, not enough. Obviously, a lot for Golden State and not much for us. But it's the way it goes. And again, I would be a hypocrite to say that other people haven't been left off. He's just [on] a list of a lot that has been snubbed. I just hate the way it went."

Paul, however, passed on protesting his snub.

"Right now, I'm just focused on trying to make sure our team is playing the right way, build, try to make sure we've got a championship mindset going forward," Paul said. "Just out here hooping."

Harden says there's 'no question' CP3 should have made roster
James Harden says that Chris Paul has been putting on impressive performances and doesn't understand why he wasn't rewarded with an All-Star nod.