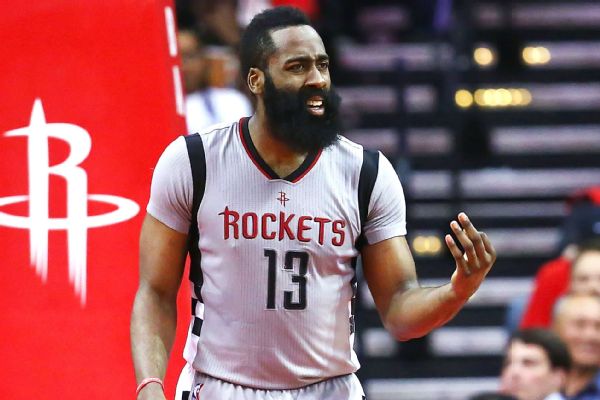 Under the new collective bargaining agreement that takes effect on July 1, both players are eligible to bypass free agency in 2019 and add four years and approximately $160 million to their contracts.

Harden has an option to be a free agent in two years, and Wall's contract expires at the same time. If their teams make the offer and they agree, they can commit to stay until 2024.

Meanwhile, Indiana Pacers forward Paul George and Utah Jazz All-Star Gordon Hayward, by not making the All-NBA teams, are not eligible for the max extension this summer.

Stephen Curry and Russell Westbrook are also in position to sign what is known as a designated player veteran extension.

Both can re-sign for five years and approximately $210 million with their teams under the new rules, Curry through 2023 with the Golden State Warriors and Westbrook through 2024 with the Oklahoma City Thunder if they so choose.

Those two had already qualified under the rules because they had made the All-NBA team the previous two seasons.

Wall and Harden are new additions to the exclusive list.

Harden and Westbrook both signed contract extensions last summer -- Westbrook added one year to his contract; Harden added two. The players' union and the owners worked out a special dispensation that allows them to sign new extensions this summer, which otherwise would not have been allowed.

DeMarcus Cousins would have been eligible to sign an extension this summer, but he lost the ability when the Sacramento Kings traded him to the New Orleans Pelicans. Players who are traded within their four-year rookie contracts are not eligible.