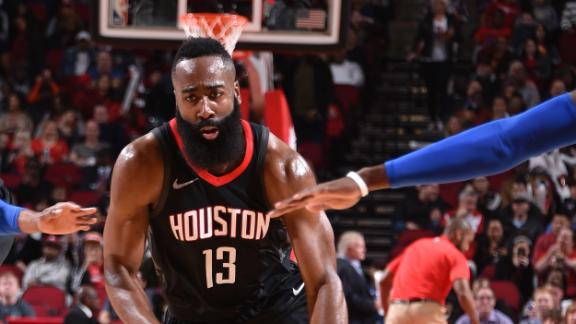 James Harden became the first player in NBA history to score 60 points as part of a triple-double in the Houston Rockets' 114-107 home win over the Orlando Magic.

"I just gave it all I had tonight,'' Harden said after Tuesday's contest. "We all did. We all fought for 48 minutes, we got key stops when we needed to and we made big shots.''

Harden scored 18 points in the fourth quarter to eclipse the 57 points Calvin Murphy scored in 1978 to break Houston's single-game scoring record. After Harden eclipsed the mark, cameras in the arena showed a shot of Murphy, who works on the television broadcast team, smiling and clapping for The Beard, who also had 10 rebounds and 11 assists.

The Rockets were down several key players for Tuesday's game.Chris Paul, who has a sore groin, and Trevor Ariza, who is dealing with a strained hamstring, both sat out. They lost another player when Eric Gordon, who is second on the team in scoring with 19.5 points a game, left early in the second quarter with lower back stiffness.

The game was tied at 107 after a basket by Magic forwardMarreese Speights with just under four minutes to play. Neither team scored for more than two minutes after that -- until Harden took over, posting the next six points to make it 113-107 with 45 seconds left. He set the scoring mark when he stepped back and netted a 3-pointer before crashing to the court after being fouled by Mario Hezonja. He then made the free throw to give him 60 points and bring the crowd to its feet.

"Amazing, [and] topped it off with a four-point play at the end,'' Rockets coach Mike D'Antoni said. "But we had to have every minute from him.''

Harden, who also had four steals and a block, grabbed his 10th rebound a few seconds later to earn his third triple-double this season. He made 17 of 18 free throws and was 19-of-30 from the floor with five 3-pointers. He said he didn't realize he was the first player with 60 points in a triple-double.

"It's a good feeling, I guess,'' he said. "Just try to go out there and make an impact every single night on the game, however I can. Whether it's scoring, rebounding, assists, steals, whatever it is. And tonight, I guess I was doing everything.''

Harden's big night came as he played 46 minutes and 26 seconds -- representing a career high for a regulation game -- with Houston missing so many players.

"I was shocked to see that,'' Speights said of Harden not getting worn out by playing so many minutes. "He didn't really get subbed out, and that shows the growth in his game and the maturity in his game.''

It was Harden's fourth 50-point game this season and ninth of his career. Tuesday's performance bested his previous career high of 56 points set in November against theUtah Jazz.

"I have never seen a performance like that,'' said Harden's teammate Gerald Green. "I caught myself just being a true fan throughout the whole game. ... What he did today was remarkable.''