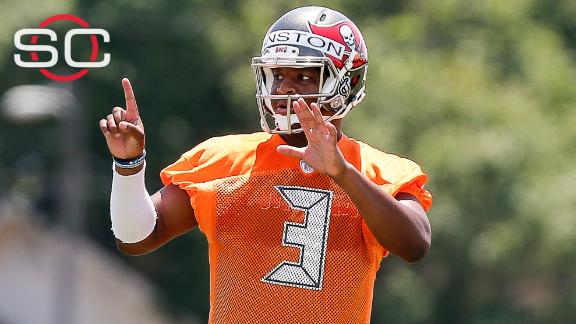 TAMPA, Fla. -- Jameis Winston's weight is right where he wants it to be with the Tampa Bay Buccaneers scheduled to hold their first practice of training camp Saturday.

"I'm 236 [pounds] right now," the No. 1 overall pick in this year's draft said Tuesday. "And I know in this Tampa heat during training camp, I'm going to lose a little bit more. I'm back at a good weight. I'm just looking forward to going out there and balling out."

Winston's comments came after he and the other Tampa Bay rookies took part in a bowling event with members of Tampa's Fire and Rescue Department. The first-year players reported Monday night and are going through meetings before the veterans report Friday.

Winston's weight was a hot topic prior to the draft, when photos in which he appeared overweight circulated on the Internet. But Winston said his weight is under control. He was listed at 230 pounds in his final season at Florida State.

Although players have been off the last five weeks, Winston has stayed in shape by working with his receivers. Vincent Jackson and Louis Murphy spent time working with Winston in Tallahassee. Winston also said he has worked out with tight end Austin Seferian-Jenkins and receiver Russell Shepard in Tampa.

"There never truly is an offseason," Winston said. "These guys have been working their tails off trying to get better and trying to get into football shape. We're ready to get football back in action."

Winston played baseball at Florida State, but said he was glad to have an offseason in which he could focus on football.