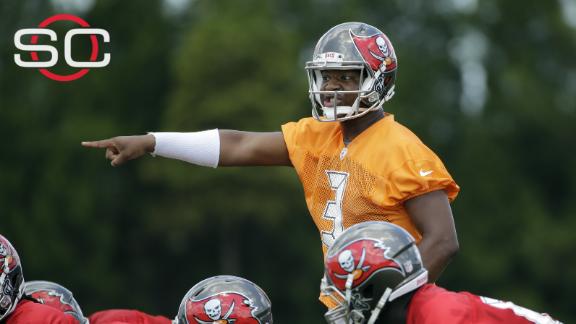 TAMPA, Fla. --Jameis Winston, speaking on the opening day of Tampa Bay Buccaneers training camp, said he has "matured" since his days at Florida State.

Winston was asked Saturday how much he has grown since his first day of college.

"I've matured since I was an 18-year-old kid, just getting into mischievous things," said Winston, 21. "But now I love this opportunity that I've been given. It's a blessing. The best thing about it is my dream always was to be a professional quarterback, and I've achieved that dream."

Winston's history at Florida State has been well documented. The Heisman Trophy winner was accused of sexual assault when he was an 18-year-old freshman but was never charged, with prosecutors citing a lack of evidence.

Winston also was questioned by police after an apparent BB gun battle with other Seminoles players in 2012.

Later during his career at Florida State, Winston was cited for shoplifting crab legs and suspended for a game after shouting a vulgar phrase on campus.

The Bucs have repeatedly said they are comfortable with Winston's past after doing extensive research on him. Coach Lovie Smith said Friday that Winston will be the starting quarterback after sharing first-team work with Mike Glennon in the offseason program.

Winston said he doesn't need to come in as a vocal leader.

"On this team, I'm just accepting my role," Winston said. "We have a lot of veterans.Vincent [Jackson], Gerald [McCoy] -- those guys are our leaders. My job right now is just to play quarterback."