Jalen Hurd says he plans to transfer from Tennessee 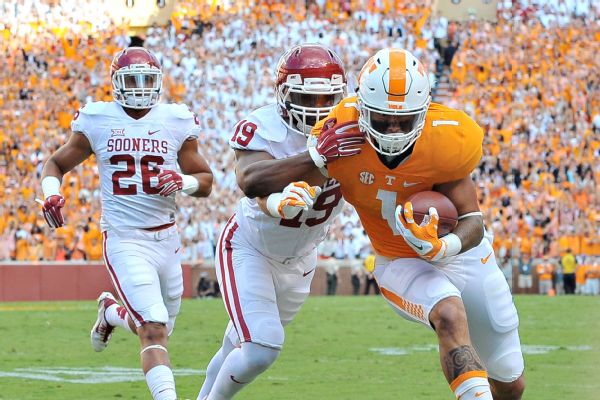 Hurd's plans to transfer were first reported by radio station WNML in Knoxville, Tennessee. The radio station also reported that Hurd, who is 6-foot-4, wants to switch positions and will attempt to play wide receiver or tight end at a new school.

Jones said he met with Hurd on Monday morning and discussed the situation.

Hurd, a junior, has had an injury-plagued season and didn't play in the second half of Saturday's 24-21 loss to South Carolina.

Sources close to Hurd have been saying for a year or more that he preferred to play in an I-formation offense.

The loss of Hurd would limit Tennessee's options in its rushing attack, as the Vols also are missing Alvin Kamara, who sat out the South Carolina game with an unspecified injury.

Kamara's absence likely means that sophomore John Kelly will be Tennessee's main running back this week. Kelly ran for a team-high 94 yards on 14 carries against South Carolina and has rushed for 209 yards on 33 attempts this season.

"Obviously he will gain a greater role in our offense," Jones said. "He's an individual who's earned this opportunity. You talk about dynamics of leadership, he's one of the leaders of this football team. His energy. His passion. He was one of the most vocal players we had last night in my individual meetings with some guys. You talk about asserting your will on a football team, he's very, very passionate."

ESPN's Greg Ostendorf and The Associated Press contributed to this report.